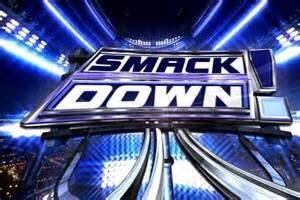 Fatal 4 Way Match
Jimmy Uso vs. Big E vs. Fernando vs. Cesaro
Uso and Fernando start battling in one corner as Big E and Cesaro battle in another. Big E gets the better of Cesaro with a punch to the midsection. Uso then splashes Cesaro in the corner as Fernando gives Big E a few right hands. Uso then starts battling Fernando and Cesaro splashes both Fernando and Uso in the corner. Big E then splashes all 3 men in the corner. Big E with a spinebuster to Fernando. Cesaro then clotheslines Big E out the ring. Cesaro then sets Fernando up for a suplex and Uso joins in to help. Big E then comes in and helps both men suplex Fernando. Cesaro does the Cesaro swing to Fernando and then slingshots him into Uso. Big E then goes for a clothesline on Cesaro but Cesaro sets Big E up for the Neutralizer but Uso with a superkick and a splash to Cesaro for the pin and the win.
winner: Jimmy Uso

We see Renee Young and Byron Saxton at WrestleMania Axxess and we are shown a look at Brock Lesnar’s announcement on SportsCenter that he will not be returning to UFC and has re signed with WWE.

We are shown highlights of the Divas Championship match between Nikki Bella and Paige this past Monday night on RAW where AJ Lee accidentally cost Paige the match and a fight between AJ and Paige broke out after the match. Renee Young confirmed that both AJ Lee and Paige are in L.A. tonight for Smackdown and are hoping to hear from them later tonight.

We are shown a video package for the United States Championship Match where Rusev will defend against John Cena. Rusev cheated to beat Cena at Fast Lane by low blowing him. Rusev then denies Cena a rematch for Wrestlemania for weeks. Cena then applies the STF on Cena after talking bad about the US and Lana agrees to a match for Rusev so he can break the hold.

We are shown a video package of The Randy Orton vs. Seth Rollins match. We see Seth Rollins time in the Shield up until where he turned on them to join The Authority. We then see where there was dissension between Orton and Rollins and eventually the Authority turned on Orton and took Rollins side. Rollins put Orton out of action after giving him a curb stomp on the announce table. Orton returned at Fast Lane and then the next night on RAW re joined The Authority and then a few weeks later turned on Rollins in a tag team match. Rollins has tried to outsmart Orton since then but has failed to do so. Orton says he plans to finish the final touches to Seth Rollins at Wrestlemania.

AJ Lee’s music plays as she makes her way out. AJ has a mic and she says that everyone has known her for a long time. She says she’s been a Diva, General Manager, and everyone’s girlfriend. She says the most important accomplishment of all is being the longest running Divas Championship. She says she loves that title as does Paige and The Bella Twins have them butting heads. AJ Lee says she is going to take down The Bella Twins. She asks if she’s going to do it alone or along with Paige. Paige’s music plays as she makes her way out. Paige says AJ Lee is not fooling her. She reminds AJ it was almost a year ago where she beat AJ to become Divas Champion and she knows AJ doesn’t want her to be champion. AJ says it’s no secret she wants to be Divas Champion and what she wants she gets. She says that she needs for her and Paige to get along Sunday night to take down The Bellas referring to them as The Kardashians. Paige asks how does she know this isn’t just some plan for her to screw her over. AJ says because she hates losing and she needs someone who is just as crazy as her, which Paige is. Paige agrees and says they should ditch the Frenemies title and be tag team partners.

The Bella Twins’ music plays as they make their way out. Nikki says that AJ can manipualate people all she wants but that won’t help her win on Sunday. Brie talks about how strong a bond the Bellas have as she forgives her Nikki for the bad things she did to her a few months back.. Nikki says the last thing anyone needs is AJ Lee as a Divas Champion because she’ll never show up to defend it. She says Brock Lesnar worked more dates than AJ. Brie says that everyone wants to be a Bella. AJ makes a joke about it and Paige says quite the opposite, they enjoy being freaks. AJ says that she and Paige are what real women look like and they will kick their asses at Wrestlemania. Nikki Bella then says a real woman won’t talk but will actually fight. Nikki starts to head to the ring to fight but Brie holds her back and AJ says that’s exactly what she though and calls them a bitch. AJ’s music plays as The Bellas head back up the ramp.

We are shown a video package of The Undertaker’s Wrestlemania streak. Then we see where Brock Lesnar ended the streak last year at Wrestlemania 30. We then see where Bray Wyatt has been calling out The Undertaker questioning whether or not he still has it. He questions whether or not Taker is afraid. Wyatt says he will be the new face of fear. Undertaker has accepted the challenge saying he is not yet dead and that Wyatt will rest in peace.

8 Man Tag Team Match
John Cena, Mark Henry, Daniel Bryan, and Roman Reigns vs. Seth Rollins, The Big Show, Kane, and Bray Wyatt.
Roman reigns and Seth Rollins start the match off. Rollins has Reigns in a headlock and Reigns shoves Rollins off and tackles him. Rollins gets back in control and works Reigns in the corner. Rollins then charges at Reigns but Reigns with a clothesline and then works Rollins in the corner and then gets a tilt a whirl slam on Rollins. Rollins then gets a cheap shot on Reigns and tags in Wyatt. Wyatt then whips Reigns in the ropes but Reigns with a clothesline to Wyatt and then works Wyatt in the corner. Wyatt then with a kick to Wyatt in the corner and Wyatt tags in Kane. Kane with a clothesline to Reigns and then a right hand but Reigns ducks and gets a right hand on Kane. Kane charges at Reigns but Reigns with a kick to the face and comes off the top rope with a bulldog. Kane tags in Show and Reigns tags in Henry. Henry and Show trade right hands and Henry whips Show in the ropes but Show with a shoulder tackle to Henry. Show gets Henry in the corner and splashes Henry. Show tags in Wyatt who works on Henry against the ropes.

Wyatt then tags in Rollins. Rollins gets in Henry’s face and Henry shoves Rollins and Rollins tags in Kane. Henry goes to make a tag but Kane stops him and works on him with kicks. Kane gets Henry in the corner and gives him 2 right hands and tags in Show. Show with a chop to Henry’s chest. Henry starts to fight back but Show with a big boot to Henry. Show then steps on Henry. Show then presses Henry against the ropes with kicks to the back as Smackdown goes to break.

Back from Break and Cena and Wyatt are the legal men and Cena in on offense and Kane enters the ring and Cena gives him a right hand and Wyatt with a clothesline on Cena and Wyatt tags in Show. Show enters the ring and slams Cena on the mat. Show tags in Kane who works on Cena with kicks. Kane gets Cena in the corner and tags in Rollins. Rollins kicks Cena in the corner and the ref holds him back allowing Wyatt to get a cheap shot on Cena. Cena and Rollins trade right hands and Cena sets Rollins up for the AA but Rollins gets out and tags in Wyatt. Wyatt then gets a right hand on Cena and then slams him on the mat. Wyatt then comes off the ropes and hits a back splash on Cena. Wyatt tags in Rollins and Rollins has Cena in a sleeper hold and Cena is to his feet and backs Rollins in the corner and falls to the mat. Rollins comes off the top rope with a neckbreaker for a 2 count. Rollins kicks Cena and then tags in Show. Show with a cheap shot to Henry knocking him off the mat. Show goes to the top rope and goes to splash Cena and Cena moves as Show eats canvas. Rollins tags in and charges at Cenabut Cena sends Rollins flying out of the ring. Cena tags in Bryan who knocks both Wyatt and Kane off the apron and then gets a clothesline on Rollins and hits a knee to the face of Rollins in the corner. Bryan then gives Rollins a hurricarana off the top rope and gives him repeated kicks.

J&J Security get on the apron and are knocked down by Bryan and Rollins gets an enziguri on Bryan. Rollins tags in Show who knocks Reigns off the apron. Show then sets Bryan up for the chokeslam but Reigns comes in with a superman punch to Show. Wyatt then sets Reigns up for sister Abigail but Reigns gets out and spears Wyatt. Kane then goes for a chokeslam on Reigns but Reigns ducks and spears Kane. Reigns then sends Show in the corner. Henry then splashes Show in the corner. Cena with an AA to Show. Bryan then with the running knee to Show for the pinand the win.
winners: Daniel Bryan, Roman Reigns, John Cena, and Mark Henry