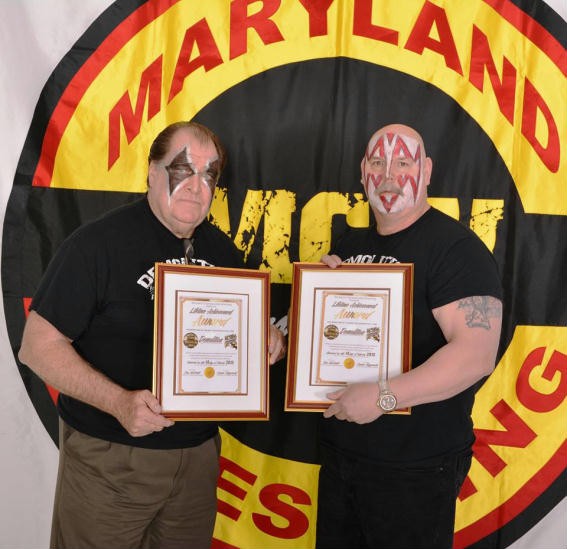 Baltimore, MD March 17, 2015- On March 14th at Maryland Championship Wrestling’s (MCW) Annual Tag Wars event in which we pay homage to the art of Tag Team Wrestling MCW was honored to present a lifetime achievement award To one of the greatest tag teams of all time Demolition Whose outstanding service and contributions to the world of professional wrestling have earned them world-wide recognition and admiration from peers and fans.

The Current MCW Tag Team Champion’s Jimmy Starz & Sexy Steve “The Hell Cats” had the privilege of presenting the awards to Demolition at the MCW Arena: “What an amazing honor it was to invite Ax & Smash to the ring and present the awards, It was so surreal because it was Demolition that made me fall in love with Tag Team Wrestling when I was a kid” says Jimmy Starz.

The event featured several different variations of Tag Team Matches but presenting the awards to Demolition was equally as important to the Hell Cats as their Tag Team Title defense that they had against King McBride & Ken Dixon. “Standing in the ring and watching Ax & Smash come to the ring one more time to their ring music made me feel like a 12 year old kid again. I Broke my finger during my match but could not feel it, all that I could feel was the goose bumps I was covered in watching Demolition come to the ring” says Sexy Steve

MCW’s next event is this Saturday March 21st in Frederick Maryland featuring Matt Hardy, The Boogeyman & Terri Runnels. You can get more event information as it becomes available & Purchase tickets online at MCW’s official website www.MarylandWrestling.com or you can call the 24 Hour MCW Information line at 410-541-6291. Also make sure to stay up to follow MCW on all of our social platforms. On Facebook search Maryland Championship Wrestling, follow us on Twitter @MCWWrestling and also follow on Instagram @MarylandWrestling