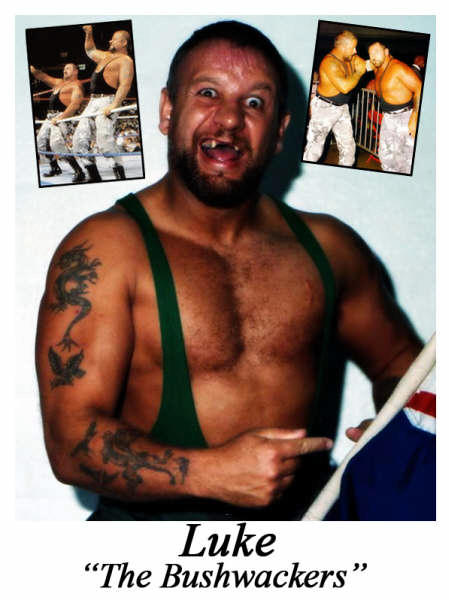 This week, the newest inductee into the WWE Hall of Fame Class of 2015, Bushwacker Luke, one half of the Bushwackers tag team, was interviewed by Ryan Rider on Main Event Radio. Luke discussed his induction, his 40 year career, working with every member of the Hart family, not knowing what an elevator was, and he shared lots of funny road stories. The interview can be downloaded at: http://tinyurl.com/mefc42h

Hart Family and 3 generations of Samoans: I worked in the ring with and against all the Harts – with Stu Hart, with Smith, Bruce, Keith, Bret, Dynamite Kid. Not many people can say that.

Bret was a piece of talent. Both he and Shawn Michaels, when I worked with HBK when he was 18 years of age, I knew already that both of those guys would go far in life.

Transitioning to the Bushwackers: We came in as the Kiwis from 1971-1979. Then we became the Sheepherders in 1979. The transition to the Bushwackers was easy for us. Vince said he wanted us to be between the Moondogs and the Sheepherders. The Sheepherders had been on TV for 10 years, the Moondogs for many years – so we decided that we wanted to create something different than either of those teams. Moving away from the roughhouse style, we were professionals – we went from a wrestling company in the NWA to a celebrity company. They [NWA] sold wrestling; WWE/WWF sold celebrities – Hulk Hogan, Wrestlemania. I’m a Sheephearder because I’m wild and hardcore at heart. But the Bushwackers made the money; Vince’s promotion put my face around the world.

Bushwacker Butch’s health: He left me in 2002 due to sickness. He was in the hospital for 12 weeks, in a really bad state. He was in ICU for 11 days, arms strapped down and on tranquilizer. If I hadn’t found him, a few hours later he would have been dead. He’s much better now. After the 12 weeks he packed up and went home to be with his kids and grandkids. In 2010, he had a relapse and woke up in the hospital. They took his hip out, and didn’t put another one in until 2012. He will be using crutches, but he will be at the Hall of Fame.

Today’s stars: I was around in ROH when Bryan was there, AJ Styles, Samoa Joe, CM Punk, Tyler Black [Seth Rollins] – great bunch of guys, turned out to be great workers. Dean Ambrose, he’s a bit of a lunatic, he worked for me. I was a booker for years, originally for Joe Blanchard in 1983 and then in Puerto Rico with Bruiser Brody and Stan Hansen and Abdullah the Butcher. Then more recently for 8 years in IWA Puerto Rico with Savio Vega and Vampiro and Ricky “Mesias” Banderas. Abyss was created by me and Dutch Mantell. I gave him the mask and put him in the ring, and Dutch gave him the name Abyss.