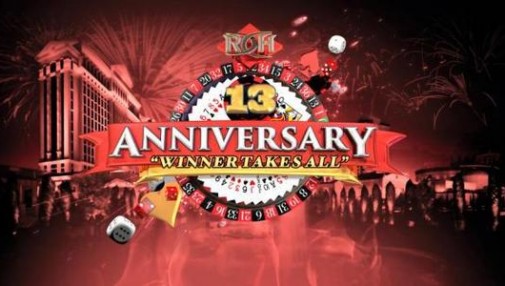 Ring of Honor 13th anniversary show from The Orleans Hotel in Las Vegas.

Due to travel problems Doc Gallows is off the show.

Sydal lands a spin kick to the head and flying knee. Sydal follows with a standing moonsault in the middle for a two-count.

Alexander hits a Michinoku driver and gets a two-count. Alexander then hits the Lumbar check and gets another two. Alexander misses a running dropkick in the corner and Sydal hit the shooting star press for the win at 9:37. Good opener, lots of cool stuff throughout the match.

Stokley Hathaway and Veda Scott are in Moose’s corner.

They return to the ring and Moose lands the spear and gets the win at 5:15 and is still undefeated.

Anderson comes out and says they are a man short and ready to fight alone after drinking 40 beers last night.

The early portion sees Bennett and Taven beaten down by The Addiction as well as Anderson.

Anderson eats a superkick from Taven but then side steps and Bennett spears Taven.

Anderson sling shots into a Kazarian cutter for a two-count.

Bennett hits the twist of fate and then Taven hits a swanton for a two on Kazarian.

Daniels goes for Angel’s wings on Taven but Anderson stops Daniels and hits the stun gun.

Taven and Bennett hit a superkick and spear followed by a spiked piledriver to Anderson and The Kingdom wins the match at 12:00.

They hold the IWGP tag titles over Anderson.

Jimmy Jacobs is on commentary for the match and drinks wine with Corino.

Whitmer takes most of the first five minutes, Strong hits a superplex to Whitmer as Strong fights back. Strong hits an Angle slam and gets a two-count.

Whitmer hits a swinging fisherman buster and then another for a two-count. Adam Page grabs the leg of Strong and then Strong takes out Page with a sliding dropkick to the floor.

Whitmer delivers the “kiss of death” but Strong immediately fires off a knee and Strong hit the End of Heartache for the win at 10:56.

Maria Kanellis comes out and says she cannot go through the match because she is pregnant. This allows Michael Bennett to run in and superkick Mark Briscoe and Maria hits ODB with the title belt and gets a two-count.

They go to the floor and ODB hits a fall away slam to Maria into the barricade.

ODB presses her over the top to Briscoe and Bennett on the floor. ODB then comes off the top and hits a crossbody to all three on the floor. All four end up on the apron and Bennett goes for a spear and ends up hitting Maria with it.

Briscoe holds up Bennett on his shoulders and ODB hits the doomsday device coming off the apron.

ODB went to hit the BAM but it didn’t look smooth and she got the win at 5:19.

Briscoe and ODB take the “title of love” and rip off all the pink material and stickers.

Styles teases the Styles Clash really early and ACH blocks but the crowd reacts incredibly to the tease of the move.

ACH mocks Styles with his mannerisms and starts playing heel. ACH goes to scale the ropes and go for his dive to the floor and gets stopped mid move by Styles. It is Styles in control of the match until he goes for a springboard and he shoves Styles to the floor and follows with the Fosbury flop and citing Styles for being the innovator of the move that ACH delivered.

ACH hits a new move called the Big Mac Attack, which is a neck breaker off his shoulders and gets a near fall. Styles is on the floor and pulls out ACH’s leg and drops him face first on the floor and then follows with a springboard forearm into the ring.

Styles misses the Pele kick and ACH hits a double foot stomp off the top and the misses the 450 off the top, Styles applies the calf killer and ACH counters into a pinfall attempt. Then Styles gets up and hits the Bloody Sunday followed by the Styles Clash for the win at 15:30. This was really great, best match so far on the show.

They shake hands and hug after the match.

reDragon vs. The Young Bucks for the ROH tag titles

Shayna Baszler comes out with reDragon. Kevin Kelly mentions that Jessamyn Duke and Phil Baroni are also at the show tonight.

Rocky Romero joins them on commentary. Romero announces he will be doing dates for ROH this month with his new tag partner, Trent Barreta.

Tons of double team spots from the start including the Bucks hitting a double suicide dive.

Baszler gets on the apron and does the “suck it” sign and the Bucks tease superkicking her but reDragon attacks them.

Nick makes the hot tag to Matt and he comes in with an Asai moonsault to O’Reilly, superkick and then a moonsault off the top to Fish on the floor.

They hit a superkick to O’Reilly into a powerbomb onto Fish on the floor and both O’Reilly and Fish went into the barricade.

O’Reilly get the armbar on Nick and it is broken with a top rope elbow drop from Matt.

The Bucks hit the Indie Taker to O’Reilly on the floor. The Bucks then hit Fish with Chasing the Dragon for a near fall while O’Reilly is out on the floor.

The Bucks hit More Bang For Your Buck and they have it won by Baszler pulls Todd Sinclair to the floor. reDragon comes back and attacks and hits Nick with Chasing the Dragon and this time Matt pulls Sinclair out of the ring.

reDragon takes out Matt and send him to the floor and hit Chasing the Dragon to Nick for the win at 15:42.

Jay Lethal vs. Alberto El Patron for the Television title

They fight on the floor with El Patron throwing Lethal around.

Lethal hits three consecutive suicide dives and the final one sends El Patron over the barricade. Lethal hits the Lethal Combination after El Patron tries to kick him in the head and Lethal gets a two-count.

Truth Martini runs in and El Patron applies the arm bar, Lethal comes off the top to break it but he jumps into the armbar but breaks the hold with the Book of Truth hitting El Patron in the head.

Jay Briscoe vs. Tommaso Ciampa vs. Michael Elgin vs. Hanson for the ROH title

Ciampa hits a pair of running knees and sends Elgin and Hanson to the floor.

They note that Briscoe has not been pinned in over two years.

Ciampa hits a kryptonite krunch off the second turnbuckle to Briscoe for a two-count.

Todd Sinclair takes a big bump to the floor and Hanson hits a Rikishi driver to Briscoe and has the pinfall but the referee is out.

The KRD (the masked guys with the red faces) run in and attack Hanson and tease that it’s The Kingdom (so it’s not) and then Raymond Rowe returns and chases the KRD out and into the crowd.

Elgin then puts Briscoe through a table off the apron and to the floor. Elgin gets a chair and teases a conchairto but Nigel McGuinness runs in to stop him. Elgin then goes to powerbomb McGuinness and Ciampa pulls McGuinness to safety but then hits Elgin with a chair but the referee is still out.

Samoa Joe comes out and hands the title to Jay Briscoe and they shake hands and they get into each other’s face as they go off the air.

They announce their next pay-per-view for Friday June 19th in New York City.