Highlight from the GRP interview with Paul London: Not trusting WWE, low offer from TNA, frustration with ROH, more 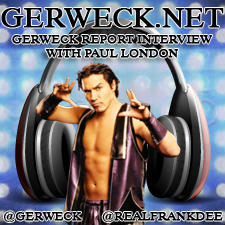 – Why he didn’t go to TNA after being released by WWE?
London: “I was taken back by the number they offered me. They were going to offer me a really low amount of money for what I put my body through. You are going to offer me peanuts, just the peanut shells, and its just a try out?”

– Return to WWE?
London: “I would be open to collaboration, but I don’t trust them guys as far as I could throw ’em. It would take a lot.”

– The sloppiest wrestler London ever worked against?
London: “Ken Anderson, terrible. No regard from anybody’s well being, just very hard to work with physically. And he thinks he’s amazing.
I would rather wrestle a car door than that guy.”

– His smile during the McMahon limo being blown up angle
– WWE not caring about the wrestler’s well being
– His thoughts on NXT
– Suffering concussions while working for WWE
– WWE banning the 450
– The death of kayfabe
– Working with Chris Benoit
– The media’s coverage of the Benoit tragedy
– WWE’s attempt to remove Benoit from the history books
– What Chris Kanyon told him about working in WWE
– Force feeding the wrestling fan today
– What is wrong with today’s wrestling product
– How many was he actually offered by TNA, and receiving a royalty check from the company for less than a buck
– And more!

A link to Part I

A link to Part II

A link to Part III