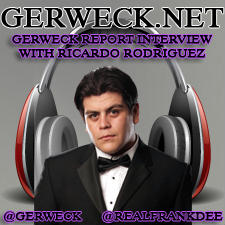 – His departure from WWE: “I left under my own terms”
– “I had almost two years to go!” said Rodriquez of the WWE contract he was granted his release from
– On why he left WWE: “They weren’t doing anything with me”
– “I don’t think they were too fond of myself” he said of the new regime in WWE
– “I created the Ascension, that was my original idea back in FCW,” Rodriquez states in the interview
– Ring announcing in WWE
– On turning babyface: “I could have been done differently .. I think it was kind of forced down people’s throats and I wasn’t too fond of that”
– Issues with his weight in WWE
– Not being WWE’s first choice to be Alberto Del Rio’s personal ring announcer
– The changing of the guard from John Laurinaitis to Triple H in talent relations
– Triple H’s style: “He is involved in a lot of things”
– On Raw: “I haven’t watched it in awhile”
– On Triple H and NXT: “That is his baby”
– The riggers of being on the road full-time
– The creative process in WWE
– WWE writers: “It’s a revolving door”
– The lack of competition for WWE
– The pay outs changing due to the launch of the WWE Network
– On the new pay outs for the video game: “We got dicked, royally!”
– WWE employing wrestlers as “independent contractors”
– Ricardo being called a bumblebee in WWE
– How he learned that Stephanie McMahon speaks Spanish
– Ricardo’s reaction to the departure of Justin Roberts
– The possibility of working for Lucha Underground and TNA
– WWE ending The Undertaker’s Wrestlemania winning streak
– Del Rio’s departure from WWE
– The not so random testing policy in WWE
– Sting finally showing up in WWE
– Randy Savage announced for the WWE hall of fame
– WWE’s PG content
– WWE dropping the brand extension
– Funny road stories
– And much more!

Click here for our Blog Talk Radio page
E-mail us at gerweckreport@gerweck.net
You can also listen to the Gerweck Report via iTunes on tunein, Stitcher and on Spreaker