Gerweck Report with D-Lo Brown: Why he feels Savage will never get into the WWE HOF, Dixie not growing in the biz, PG rating, and more 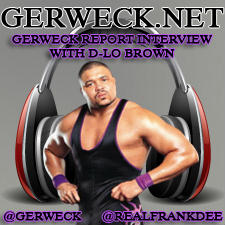 – D-Lo on today’s wrestling: “I don’t keep up with any of the products, “TNA or WWE!”
– Going back and watching some of his old matches and footage
– What does Vince McMahon need to do to rejuvenate the wrestling business?
– WWF winning the Monday Night war
– Did WWF botch the WCW Invasion?
– TNA’s roster today
– Thoughts on the Aces and Eights angle – “We could have done more with the talent that was in there.”
– The Spike TV/Vince Russo fall out
– Four sides vs. six sided ring
– Over exposure of the TNA in Orlando
– On Dixie Carter: “Dixie Carter is a great business woman, but she is not a great wrestling woman! .. I never saw her grow as a wrestling owner!”
– Working with New Jack and Mustafa in SMW
– The chest protector gimmick
– Could a new nation of domination group in WWE today?
– Is PG killing the wrestling? “To me, wrestling is inherently violent!”
– The Droz incident
– On Vince Russo: “I think Vince is an ultra creative guy!”
– Does D-Lo think Steve Austin will wrestle again?
– “In my opinion, Randy will never been in the (WWE) hall of fame”
– The plight of Amhed Johnson
– Will D-Lo open a wrestling school?
– and much more!