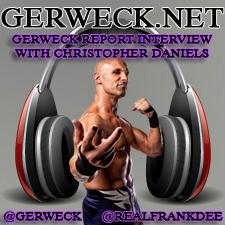 – On ROH: (Daniels and Kazarian) “We decided to make Ring of Honor our home. We have made that our number one priority.”
– The state of tag team wrestling
– On Leaving TNA: “I just feel like Frankie and I weren’t somebody’s cup of tea there .. I just assumed after awhile, that someone wasn’t on our side on the creative team.”
– Missed opportunity to work with The Wolves: “It never came around.”
– Morale in the TNA locker room
– Daniels let go by TNA for budgetary reasons? “They basically got rid of me and Frankie Kazarian and then the next tag team series they focused on, they brought back Matt Hardy and Devon .. to me, monetarily, that doesn’t make any sense .. I saw my pay checks, and I wasn’t breaking the bank.”
– WWE’s reluctance to sign TNA talent “I am surprised it never happened for AJ (Styles).”
– The possibility of working for WWE in the future. Would he accept a WWE developmental deal?
– Vince Russo in TNA: “When Frankie and I left, we had no idea he was even there.”
– On Russo: “Some of his ideas were good, some weren’t .. I just had a hard time communicating with him, I feel.”
– The TNA creative process
– Dixie Carter’s management of TNA
– TNA bringing back the six sided ring
– Never winning the world heavyweight title
– His year long feud with AJ Styles
– TNA booking Bound for Glory in Japan: “Yeah, it was confusing, I didn’t understand quite the mentality behind it.”
– Working for New Japan in the future
– Thoughts on TNA’s TV future
– What ROH needs to do to grow its audience
– His emotional return to ROH
– What ROH needs to do to attract fans to PPV
– Lack of fans attending live TNA house shows
– The possibility of working for Jeff Jarrett’s Global Force Wrestling
– Working with Hulk Hogan in TNA
– His favorite tag teams
– Will he write a book?
– Life after wrestling
– His legacy in the business
– and much more!

Current episodes of the podcasts are also available by dialing (206) 279-1499. Long distance changes my apply.