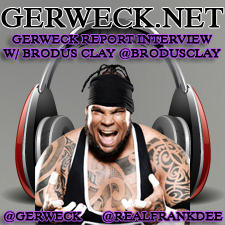 – What has Brodus been up to since departing WWE
– Clay growing up a wrestling fan, and his favorite wrestlers
– Training with Deep South Wrestling and Florida Championship Wrestling
– Why Clay feels WWE developmental is more stressful than being on the main roster
– Being mentored by the likes of Dusty Rhodes, Arn Anderson, and Bill DeMott
– Clay working as bodyguard for Snoop Dogg
– WWE wanted to call him Heavy G
– The creative process in WWE
– The development of “The Funkasaurus” gimmick
– Should John Cena turn heel? Stale character?
– What happened to the hateful heels?
– Why Clay feels wrestling isn’t as exciting as it once was
– Why Clay feels the attitude era wouldn’t work today
– Working with Tensai
– CM Punk leaving WWE
– Clay’s thoughts on the WWE Network
– Clay’s WWE highlights
– “I don’t think I completely recovered from it,” on having his Wrestlemania 29 match pulled
– Clay’s goal of working in Japan
– Undertaker’s Wrestlemania streak ending
– Might he return to WWE in the future?
– And more!