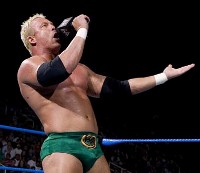 Ryan Rider interviewed Mr. Anderson this past week at the TNA Impact tapings in New York City. The interview can be heard at MainEventRadio.com.

Here are the highlights:

Looking at his time in TNA: I’ve enjoyed every moment of it. I’ve continued to travel all over the world, meet the greatest fans in the world; wrestle the greatest talents in the world. Championship gold is always on my mind. That being said, one of my big priorities is always entertaining people. Going out there and telling them a story, and just having fun. This is one of the coolest jobs anybody can ever hope for. Any time that I start to feel aches or pains, tired from traveling; I just got back from the UK so I’m jetlagged. When I start to feel sort of sorry for myself, I remember how damn cool this job is. I feel like a million bucks right now, maybe a million and one.

Tapings at the Hammerstein Ballroom: It’s phenomenal. There’s so much history in this building. The fans here turn it up to a level that we don’t see in many other places. Every once in awhile you’ll run into a crowd that’s really rambunctious, that really likes to get into things. This crowd loves to chant, loves to be entertained. If they aren’t entertained, then they like to entertain themselves. It can be a little scary, nerve-wracking as a performer. If I go out there and I don’t entertain them, they will entertain themselves; at my expense. I don’t know if it’s a fresh start. We’re always constantly evolving and trying new things. I don’t see it as a reboot or a reset. We made some changes and I think those changes have been good. I’m excited about what the future holds.

TNA-SpikeTV situation: I’m sure that both sides will come to some sort of agreement. In the end, whatever is going to be best for both worlds will end up happening. I’m very optimistic that if we stay at Spike it will be for the good. And if we end up leaving, we will make things work wherever we go.

Why he’s stopped using the “asshole” catchphrase: Because I was told to. We’re trying to offer a little more of a family-friendly product. There’s a lot of people that are turned off by bad language. It’s something that I feel I don’t need. It’s just a word. My work speaks for itself. They could change my name tomorrow and I wouldn’t care. I would go out there and work my butt off and make the most of it.