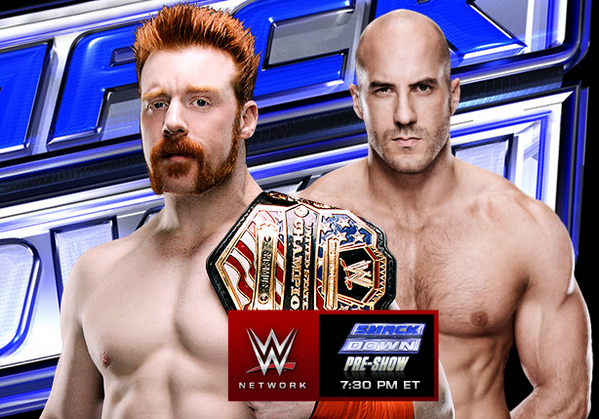 Roman Reigns and Dean Ambrose make their way to the ring to talk about the ladder match for the WWE title. Ambrose says he’s getting ready to shut down Seth Rollins for good. Triple H comes out and says that they only have room for one of them to qualify. Ambrose vs Bray Wyatt is set for later and Triple H announces Reigns vs Barrett.

Jey flies over the top rope onto Rowan. Rowan immediately comes back and clotheslines Uso. Rowan misses a big splash. Jey goes for a samoan drop but fails. Rowan throws Jey off the ropes. Side slam from Rowan for the three count.
Winner: Erick Rowan

Bo does his usual sympathetic gimmick and ends up beating R-Truth fairly quickly with the Bo-Dog, followed by a victory lap.
Winner: Bo Dallas

Very stiff and brutal match from these two. Cesaro with uppercuts and Sheamus with clubs. Every time one guy seems to be ahead, the other one comes back a flurry of offense. Cesaro in command but Sheamus comes back with a bunch of clubbing blows and two huge knees to the head of Cesaro. Irish Curse to Cesaro for two. Swiss Death by Cesaro for a close two count. Cesaro with a small package for the win!
Winner: Cesaro

Fandango and Adam Rose go back and forth for a bit. Fandango works over Rose, however Rose bounces back after a missed flying leg drop and hits the Party Foul for the win.
Winner: Adam Rose

After the match, Summer Rae, dressed as one of the Rose Buds attacks Layla.

Swagger gets some offense in at the beginning against Big E. Big E launches Swagger out of the ring. After a short burst Big E makes quick work of Swagger with the Big Ending.
Winner: Big E

Rusev and Lana taunt Big E after (and during) the match.

Aksana dodges a scissors kick and hits a spinebuster. Alicia takes her out with a northern lights suplex and locks in a real naked choke. Alicia uses a new finisher where she drives Aksana’s head into the ground with her leg.
Winner: Alicia Fox

Double front kick to the chest from Ambrose. Ambrose dives out onto Wyatt but Wyatt throws him into the apron. Bray Wyatt continues the beat down of Ambrose after the commercial break. DDT from Ambrose but it’s not enough. Bray with a chinlock on Ambrose. Ambrose goes off the ropes and Bray tries to slam him. Uppercut from Bray knocks Ambrose into the ropes and he slingshots a clothesline to Bray. Ambrose with a suicide dive on Wyatt. Ambrose with a front dropkick off the ropes. Wyatt launches himself into Ambrose while running. Small package from Ambrose for two. Dirty Deeds from Ambrose, however Seth Rollins comes out from the crowd. Ambrose chases Rollins and goes back into the ring, only for Bray to hit the Sister Abigail on Ambrose.