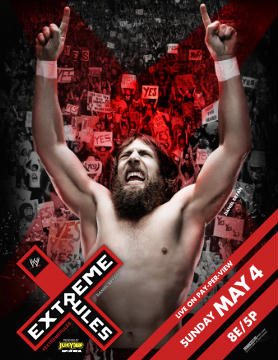 The WWE Extreme Rules Preshow kicks off from East Rutherford, New Jersey, and Josh Mathews welcomes us to the show while we see the WWE Universe filing into the IZOD Center. The All-Star WWE Network Panel of Experts consists of Booker T, Sheamus, and Alex Riley. Mathews hypes the WeeLC Match between EL Torito and Hornswoggle and the Panel makes their predictions. We then take a look back to this past Monday’s Raw, and the confrontation between Kane and Daniel Bryan. Mathews asks the Panel how Bryan can survive against Kane tonight. Booker says Bryan needs to leave Brie Bella at home so he is not distracted, and Sheamus agrees with him. Riley says Bryan is going to get revenge on Kane tonight.

We see El Torito getting amped up with Los Matadores and Hornswoggle doing the same with 3MB, and then transition into a video hype package for the on-going feud between Bray Wyatt and John Cena. Booker says we will find out tonight if Wyatt is in Cena’s head. Sheamus says Wyatt is definitely in Cena’s head, and Riley adds that a lot of the Ce-Nation is now following the buzzards. Torito and Hornswoggle charge at each other and then begin brawling. Torito takes Hornswoggle down with a head-scissors take down, and the launches to the outside and takes down 3MB. Hornswoggle tries the same to Los Matadores, but he just runs into the ropes and falls down. El Torito gets a chair from under the ring, but it’s too big for him, so he grabs a mini-chair from under the ring. He sets the chair up in the ring and uses it as a catapult for his Bronco Buster on Hornswoggle. Jinder Mahal gets brought into the ring by Torito, and we almost get a ref bump as the crowd chants “We Want Tables!” Hornswoggle comes back and clotheslines Torito. Hornswoggle gets a mini-lader and then gets a ladder that is a little bit bigger. Hornswoggle climbs the ladder and dives, but Torito moves out of the way. Torito goes for the cover, but Hornswoggle kicks out at two as we head to a “commercial.”

We go backstage and we see Zeb Colter and Jack Swagger. Colter says after Swagger takes care of business tonight, he and Swagger will get out of Ethe God-forsaken city of East Rutherford. He ends it with the “We, the People” bit.

The Extreme Rules Preshow comes to an end with the Panel still debating the Six-Man Tag Team Match.

We see the opening hype package for Extreme Rules, which focuses on the feuds between The Shield and Evolution, Kane and Daniel Bryan, and Bray Wyatt and John Cena. We go live into the IZOD Center in East Rutherford, New Jersey, where Michael Cole welcomes us to Extreme Rules. We go backstage and we see Daniel Bryan with the trainer. Bryan is working out his arm when Stephanie McMahon walks in. Stephanie says she cannot control Kane and she is afraid for Daniel Bryan because he is going to get decimated and torn limb from limb by Kane. Stephanie says he doesn’t have to compete tonight and could surrender the WWE World Heavyweight Championship. Bryan tells Stephanie to get out of his face, and says he is walking out of his match tonight as the WWE World Heavyweight Champion. Stephanie says Bryan will be walking out as Kane’s bitch and then walks away.

“The Ravishing Russian” Lana makes her way to the stage for the next contest.

Truth comes to the ring rapping, but Rusev kicks Woods in the face before the bell rings. Rusev looks under the ring for something, but then just tosses Woods into the exposed steel under the ring apron. Rusev belly-to-belly suplexes Woods out on the floor and then gets back into the ring with Truth. The referee calls for the bell and Rusev begins to beat down Truth. The crowd chants “We Want Lana!” as Rusev slams Truth into the corner. Rusev charges and smashes Truth in the corner and then looks down at Woods, who is still down on the floor. Rusev charges at Truth again, but Truth gets his boot into Rusev’s face. Truth kicks Rusev again and then goes up top. Truth takes Rusev down with a dropkick and then connects with a scissors kick. Truth goes for the cover, but Rusev kicks out at two. Rusev catches Truth and then tosses him over his head, but Truth lands on his feet. Rusev comes off the ropes and heel kicks Truth in the face. Rusev grabs Truth and slams him down to the mat. Rusev applies the Accolade and Truth taps out.
Winner: Alexander Rusev.
After the match, Rusev attacks Woods and slams him down on the floor again.

We see a special recognition for the members of the New Jersey Special Olympics team, who are in attendance tonight.

We go backstage and Evolution has joined Renee Young for an interview. She asks Triple H what their game plan is for tonight. Triple H says they have 31 World Championship between them, and that The Shield does not need to worry about their egos getting in the way tonight. Triple H says we will find out tonight why he is called the Cerebral Assassin. He says they have egos, but they are well-deserved. Orton says The Shield will perish tonight, and then Evolution mocks The Shield by doing their hand gesture. We see an advertisement for some WWE toys, and then we see a vignette for Adam Rose, who will debut on Raw tomorrow night.

We see the video hype package for the feud between Evolution and The Shield. We get a video preview for the next episode of Legends House.

We see the video hype package for the on-going feud between Bray Wyatt and John Cena. We join the expert panel of Josh Mathews, Booker T, Sheamus, and Alex Riley. They talk about what we just saw with Bray Wyatt and John Cena, and then talk about their favorite parts of the show so far. Alex Riley and Booker T agree that The Shield’s victory was completely awesome, while Sheamus says his sights are set on Bad News Barrett.

We take a look back at the WeeLC Match from the Extreme Rules Preshow. After the match, we see The Wyatt Family backstage with “Little Johnny.” Wyatt says his message can no longer be ignored. Wyatt says Cena now stands alone and all of the lonely souls with nowhere left go to will join them. He asks Little Johnny what they will do, and he says “Follow the Buzzards” and puts on the sheep mask.

We see the video hype package for the on-going feud between Daniel Bryan and Kane. Bryan attacks Kane on the entrance ramp and the referee calls for the bell. Kane slams Bryan into the steel barricade and then slams him into the ring apron. Kane grabs a kendo stick and begins beating Bryan with it. Bryan fights back, but Kane clocks him with a right hand. Kane goes up top, but Bryan cuts him off and goes up top. Bryan delivers a series of right hands and then tosses Kane down to the mat. Bryan sends Kane into the ropes and then clotheslines him over the top rope and to the floor. Kane gets up first and drops Bryan with a big boot. Kane kicks Bryan in the midsection and then tosses him into the barricade. Kane slams Bryan onto the top of the barricade with a chair on Bryan’s back. Kane tosses Bryan back into the ring and tosses some chairs in there as well. Kane wedges a chair into the corner, but Bryan rolls to the outside and grabs the kendo stick. He hits Kane with it and gets back into the ring. Kane drapes Bryan over the top rope and then smacks him on the back with a steel chair. Kane slams Bryan on the chair and goes for the cover, but Bryan kicks out at two. Bryan comes back and slams Kane into the chair that was wedged in the ropes and then sends him to the outside. Bryan jumps through the ropes and onto Kane. The crowd begins a loud “Yes!” chant and then Bryan destroys the Spanish announce table and the regular announce table. Bryan slaps Kane with the table cover, but Kane counters with a right hand. Kane slams Bryan into the Spanish announce table and then hits him with a piece of the other table. Kane goes to choke slam Bryan through the table, but Bryan fights out and delivers a tornado DDT to Kane. Kane and Bryan both deliver knees, but Kane gets the upperhand and tosses Bryan into the steel steps. Kane takes the steps apart and goes for the tombstone piledriver on the steps, but Bryan counters and shoves Kane into the ring post. Bryan grabs the kendo stick and destroys Kane with it all the way up the ramo, before Kane counters with a bug right hand. Kane slams Bryan into the light grid on the stage, which knocks the lights out. Kane drags Bryan backstage and tosses him into a table. Kane slams Bryan into a trunk and the video feed is kind of choppy because Kane threw some electrical equipment into water. They fight to the parking lot and Kane tosses Bryan into the television truck. Bryan comes back and hits Kane with a shovel. They fight on the hood of a car, but Kane back-body drops Bryan onto it. Bryan comes back and nails Kane with a tire iron and Kane is down and out in the parking garage. Bryan drags Kane onto the wood plank on a forklift and then beats him with the tire iron. Bryan gets into the forklift and begins to drive it. Bryan drives the forklift back into the arena and drives it all the way down to the ring. Bryan drops Kane into the ring from the forklift. Bryan connects with a diving headbutt from the top of the forklift. Bryan goes for the cover, but Kane kicks out at two. Bryan goes for the running knee, but Kane catches him and drops him with a choke slam. Kane goes for the cover, but Bryan kicks out at two. Kane grabs Bryan and goes for the tombstone on a steel chair, but Bryan counters and DDTs Kane on the chair. Bryan goes for the cover, but Kane kicks out at two. Bryan grabs the chair and destroys Kane with it. Bryan goes for the Yes Lock, and he locks it in. Kane grabs the kendo stick and hits Bryan with it, but Bryan takes it from him and uses it for the Yes Lock. Kane gets free and crawls out of the ring. Bryan launches himself through the ropes, but Kane catches him and choke slams him through the regular announce table. Kane tosses Bryan back into the ring and grabs a table from under the ring. Kane sets the table up on the outside. Kane grabs a can of gasoline and a lighter and lights the table on fire. Kane gets to the apron, but Bryan knocks him through the flaming table. Kane gets back into the ring, but Bryan hits him with the running knee and gets the pin fall.
Winner and still WWE World Heavyweight Champion: Daniel Bryan.
After the match, Bryan celebrates his victory, but Kane gets to his feet and sets the stage on fire with his pyro. Kane’s music hits and he and Bryan stare each other down as Extreme Rules comes to a close.