Exclusive interview with Gallery1988 regarding “VelvetMania” 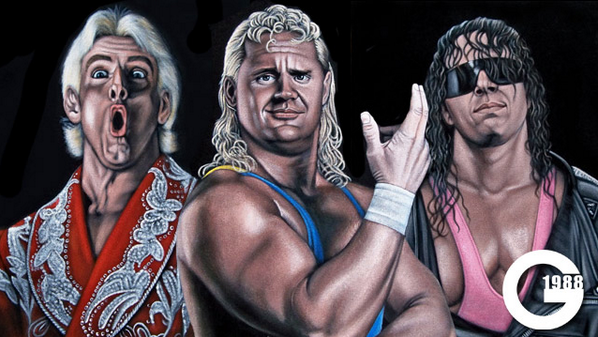 I reached out to Gallery1988.com regarding the historical portraits of professional wrestling greatest stars, including Ric Flair, Hulk Hogan, Andre The Giant, HBK, Bret Hart, etc. You can view the for sale gallery here. Here is the interview I was granted:

SG> What inspired you to do the one of kind historical portraits?

As a major fan of pro wrestling, and former writer/producer at WWE myself, these are my legends. Growing up, these wrestlers were larger than life and I just don’t feel like they get enough credit. As a gallery owner, when I approached artist Bruce White to do the show on black velvet, there was some convincing to be done. He hadn’t watched wrestling in quite some time, but I saw enough room to convince him of the artistic angle of the genre.

SG> How were the wrestlers selected? Will you paint additional wrestlers in the future?

The collaboration between Bruce White and I falls in him painting my 40 favorite wrestlers. I had originally given him a list of around 50 legends, and he knocked it down to his 40 favorite. And that’d the collection you see today. There are currently no plans to paint more wrestlers, no. It’s a collection of sorts, but who knows?

SG> Have any of the featured wrestlers reached out to you wanting a painting?

We had Ted DiBiase tweet about the show, and WWE.com did a feature story on the exhibit, which we’re very thankful for, but not a ton of wrestlers emailing about it, no. I do wish they could see them all in person, because Bruce’s technique is so incredible, the show really has a museum quality to it, and we believe it tributes them so perfectly.

SG> How long did it take to do the paintings?

Each painting took Bruce a few days to finish. Basically around 24 hours of work on each.

SG> Any interesting stories in the creation of the paintings?

It was always enjoyable to get Bruce’s take on each wrestler. He had no idea who Goldust was before I sent him my list. So to have him be like, “WOW. This guy is amazing,” was always a good feeling. To introduce artistic wrestling to an artistic mind was more rewarding than I thought it would be.