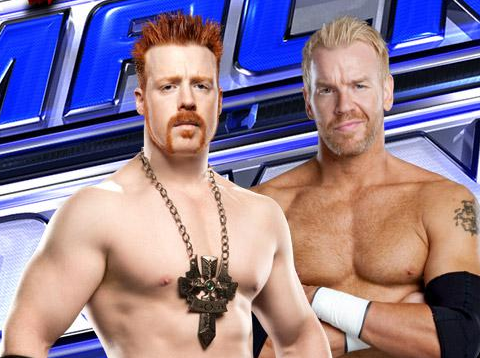 We start off the show with Daniel Bryan!

Bryan with some kicks in the corner to Swagger Swagger rolls out and escapes. Swagger takes control and tosses Bryan into the ring post. Swagger works over the damaged arm of Bryan. Swagger with a double leg takedown while holding the arm. Bryan counters Swagger with the running knee for the win!

Kane and Vickie Guerrero come out and announce Bryan is going to face Cesaro.

Cesaro continues to work over Bryan’s damaged arm. Bryan with a drop toe hold into the corner. Cesaro jumps off the top rope, connecting his knee into Bryan’s arm. Bryan tosses Cesaro out of the ring. Bryan with a suicide dive to Cesaro. Zeb distracts Bryan and Swagger attacks him, referee ejects both of them. Flying dropkick from Bryan. Bryan hits the running knee after being battered but Kane attacks him.

Kane chokeslams Daniel Bryan, Cesaro then hits the Neutralizer on him.

The Wyatt Family works over Goldust in their corner. Harper and Rowan make frequent tags between each other. Hot tag to Cody Rhodes, who cleans house momentarily. Mysterio in and getting beaten down by the Wyatt family. Goldust eventually gets the hot tag and cleans house. Goldust goes for Shattered Dreams on Rowan but Bray attacks and hits Sister Abigail for the win.

Titus beats down Ziggler while talking trash to Darren Young at ringside. Ziggler with a crossbody. Neckbreaker from Ziggler, big boot from Titus. Young starts blowing the whistle that Titus used to use and Ziggler wins via roll up!

Road Dogg beats down Jimmy and locks in a chin lock. Jimmy fights out and gets hit by the shake rattle and roll before hitting a full nelson bomb. Road Dogg goes for a pumphandle slam, only for Jimmy to counter and hit a superkick for the win.

And that’s the end of the go home show, going into Elimination Chamber!