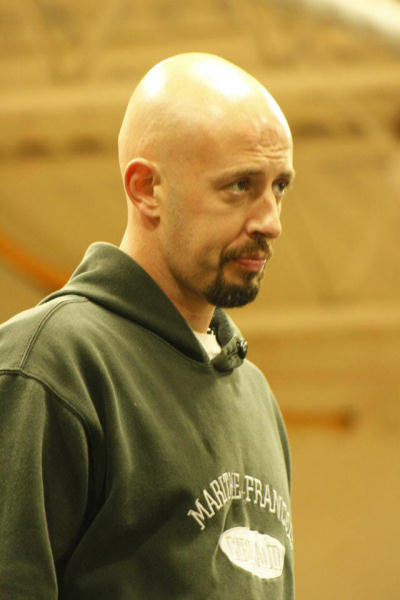 Former ECW World Champion, Justin Credible was a recent guest on WGD Weekly with Steve and the Scum, where he talked in a fantastic, half hour long interview on a wide variety of subjects. The entire interview can be heard here:

Justin talked with WGD Weekly about many of his thoughts regarding the current wrestling product as opposed to when he grew up a fan and when he actually broke in, in addition to touching on a wide variety of performers and organizations that he has worked for in the past as well. Highlights include his take on :

The current state of wrestling and what he foresees happening moving forward: “…We are in unchartered territory, and I think we are all in for some rocky roads ahead with this business. Vince got his dream, it took him a little longer than the late 80’s to buy out every wrestling territory, but he finally did it. You though after WCW that the business would all be his. TNA stuck around, but now it’s just pretty much his for the taking. You see, real quick, what I mean by that is, what made ECW popular, and what made us successful was we were the rebellious, we were the anti-WWE. If you didn’t like WWE and you didn’t like WCW, we were those guys, that you would root for, the underdogs, the rebels that said, ‘F You, we’re not going to take this bulls#*t,’ and you can get behind that. We were the cool kids on the block. Today, you ask fans what they want, they want WWE, it’s all they know. Vince got his wish and I think as a business, we really need to reevaluate it, and we need to proceed carefully because it’s going to be Vince, and Indy wrestling. Indy wrestling is good, can be very good, but it can also be atrocious. Guys that aren’t trained, guys that have no clue, guys that shouldn’t be in the ring…A lot has got to be done and unfortunately, there is no body of commissioners, or workers, or regulators. It’s the wild west out there. That really hurts it too, where anybody with a couple thousand dollars can buy a ring, have a school and put on shows…It’s a step up from a backyard promotion, with a ring… it confuses the market place, if fans go to one of these sh#t shows, won’t go back, they will just wait for WWE and then it’s what Vince wanted after all…”

The incident involving Scott Hall that wound up be a focal point of the ESPN special done on him: “…It happened kind of so quick. Basically, what happened, we being the Kliq, and a lot of the guys in the 90’s, we just kind of ran in the business like we were rock stars, you know. Kind of doing the Sunset Strip thing, like the 80’s glam bands, that’s how we lived…Groupies, sex, drugs, and rock and roll. For us it was just another day at the office and you never think you are as bad as you are. To be honest, Scott wasn’t the only one screwed up, I was just a lot better off than he was. The promoter, a lot of it goes on him, because he never should’ve put Scott out there. But Scott, he didn’t care and he wasn’t in the right frame of mind to police himself, obviously, we have all seen the footage. But it was just one of those things with promoters, it just shows the side of the business where it doesn’t matter who you are or what condition you are in, you’re a dog and even if we just have to push you out there dead, so they don’t have to give the money back kind of a thing. It was a blatant disregard for a performer’s health. Obviously, Scott has admitted he had demons throughout his career and myself included have had demons throughout my career. We’re both recovering drug addicts and alcoholics. So, it just shows that we are just pieces of trash, to go out there at any cost to entertain. But there’s casualties to it. It was one of those examples at how the dirty and ugly side of the business can be…”

His views on TNA Wrestling: “…TNA is barely relevant. I’ve said it before, I was a horrible critic of TNA, but I stand by it because they are totally the sh#ts. I’ve worked for them. They’ve had a hell of an opportunity, and quite frankly, as long as they are around, they still do have an opportunity. But they squander it around every corner…”

The difference in being a fan in the 1980’s as opposed to today and how that affects the business: “…With the times changing, and they have changed, frankly, when we grew up watching wrestling, in the mid 80’s, late 80’s, early 90’s, the Hulk Hogan era, you bought wrestling magazines, you watched the TV shows. You would have to go to live events to see some of the champions even wrestle…So, you very rarely got to meet them, up close and personal, and if you did, it was like meeting a Hollywood star. It was the biggest deal, or at least for real wrestling fans it was. I still believe that rings true to some degree today, but today in our business, it’s changed…So whether promoters or wrestlers as a whole, with the internet smart marks, dirt sheets, I mean, I’m all for certain things. You have to progress. YouTube shows are just available, 24/7, on demand content. It’s just the whole game has changed…Like, I’m sitting here at a table signing autographs for three or four hours. Fans just walk by and say, ‘hey, that’s Justin Credible,’ like it’s no big deal, whereas years ago, if I saw S.D. “Special Delivery” Jones, nothing against S.D., but he was a lesser name, but that was a big deal for me, much less to see a guy like Ted DiBiase or Greg Valentine, or Roddy Piper. So, I think that has changed, the way we perceive these guys. I think the curtain, it’s like the Wizard of Oz, where you can see behind the curtain, but it’s almost too much. The thing that makes us superstars…it’s almost too much…It’s like they feel that they are you, instead of looking up to you…it’s cool, but then, why should I buy a ticket to see you? Why should I buy your merchandise?…Sometimes, I think it does us more harm than good…”

Performers he has worked with that he still feels get looked at by fans in as “old school” and as larger than life personalities: “…Very few guys have the cache to bring that. For me, only a few guys stand out that do it. Sabu, always does, because he just looks like a killer. Terry Funk, for some reason, just transcends that. But for some reason, some guys just don’t…”

In addition to these points, Justin spoke with WGD Weekly about the importance of a performer doing his best to make a booking, views on promoters, being clean and sober for over a year, similarities between being a wrestler and having an “every day” job, stereotypes put on the wrestling business by the mainstream media, the misunderstood perception of wrestlers voiced in the opinions of the internet wrestling community, being a wrestling fan growing up and the heroes that he still crosses path with, the influences of Shawn Michaels and Ric Flair had on his career, things he finds frustrating about younger wrestlers on the Indy scene, working for years to earn the approval of Scott Hall, his emotional appearance at Tommy Dreamer’s “House of Hardcore” show alongside Lance Storm, X-Pac, Terry Funk, and Dreamer, and much, much more.

WGD Weekly with Steve and the Scum interviews a different legend from “Wrestling’s Glory Days” every week as a part of their show. You can find all of their previous shows and get updates and information on upcoming programming on their Facebook site at www.facebook.com/WGDWeekly, or on Twitter @WGDWeekly. All shows are also available on their YouTube channel and iTunes.