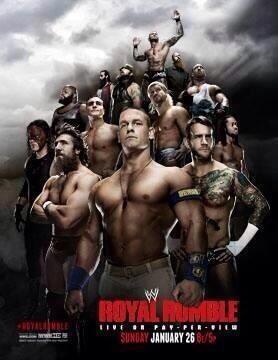 I pick up with the preshow and we see Alberto Del Rio, Kofi Kingston, R-Truth, Kofi Kingston, Jack Swagger, Antonio Cesaro, and The Great Khali picking their Rumble numbers. Damien Sandow walks in and laughs at Khali’s number. Sandow draws his own, and gets mad as Khali laughs at him.

We see a video preview on the many different ways to watch the event.

We see a preview for the Daniel Bryan/Bray Wyatt match, and then the expert panel of Shawn Michaels, Ric Flair, and Jim Duggan pick their winners. Rhodes and Road Dogg start the match and Road Dogg goes to town with a few right hands. Rhodes comes back and dumps Road Dogg to the floor and then knocks Gunn off the apron. Goldust and Rhodes jump to the outside and take down the Outlaws as we head to a commercial.

We’re back and Gunn is in control of Goldust in the ring. Gunn tags in Dogg who goes for a pin, but Goldust kicks out. Road Dogg tags Gunn back in and Gunn goes to work on Goldust. Gunn comes out of the corner, but Goldust counters with a power slam. Goldust and Gunn get the tags in Rhodes drops Road Dogg with a few clotheslines. Rhodes connects with a heel-kick and then takes both Outlaws down with a springboard dropkick. Rhodes takes Dogg down with Cross Rhodes, but Gunn breaks up the count. Gunn blind tags in and hits the Fame-asser on Rhodes to get the pin fall.
Winners and new WWE Tag Team Champions: The New Age Outlaws.

We go back to the expert panel and Michaels brags about picking the Outlaws to win. We then see the video highlights and preview for the match between Brock Lesnar and The Big Show.

We then see the video preview for the Royal Rumble Match. Wyatt and Bryan tie up and Wyatt backs Bryan into the corner. Wyatt slings Bryan out of the corner and slams him to the mat. Bryan comes back and knees Wyatt in the midsection and the face. Bryan goes to the outside, but Rowan and Harper go after him. The referee sees them and ejects them from ringside. Wyatt says he doesn’t need them to fight for him tonight, and Bryan takes him down on the outside. Bryan kicks Wyatt a few times and connects with a big kick to the head. Wyatt comes back and sends Bryan to the floor, and Bryan hits his head on the steps. Wyatt goes after Bryan, but Bryan takes out Wyatt’s knee. Bryan kicks Wyatt repeatedly and then takes him down to the mat. Bryan gets Wyatt on the apron, and then tries to suplex him back into the ring. Bryan gets onto the apron and then delivers a series of right hands. Wyatt counters and beats down Bryan and then slams him back into the ring. Wyatt gets Bryan down on the mat and then applies a headlock to Bryan. Wyatt keeps control of the match and then does his creepy walk across the ring. Wyatt clotheslines Bryan in the corner and then goes for the cover, but Bryan kicks out at two. Wyatt goes for an elbow drop, but Bryan rolls out of the way. Bryan comes back with a series of kicks. Bryan sends Wyatt head-first into the corner and then climbs to the top. Bryan takes Wyatt down with a head-scissors. Bryan comes off the ropes, but Wyatt takes him down with a shoulder block. Wyatt goes for the cover, but Bryan kicks out at two. Wyatt goes to the outside, but Bryan comes off the apron and drops Wyatt with a DDT on the floor. Bryan tosses Wyatt back into the ring and goes up top. Bryan delivers a dropkick and then delivers a series of kicks. Bryan goes for the cover, but Wyatt kicks out at two. Bryan delivers a series of dropkicks in the corner, but Wyatt counters on the last one. Wyatt goes for the cover, but Bryan kicks out at two. Bryan comes back and locks in the Yes Lock, but Wyatt bites him to break the hold. Wyatt gets Bryan onto the ropes, but Bryan shoves him off and delivers a big splash from the top. Bryan goes for the running knee, but Wyatt rolls out of the ring. Bryan dives out of the ring onto Wyatt, but Wyatt counters with Sister Abigail into the barricade. Wyatt picks Bryan up and tosses him back into the ring. Wyatt goes for Sister Abigail in the ring and gets the pin fall.
Winner: Bray Wyatt

We go backstage and we see Renee Young interviewing Paul Heyman. Heyman says the only thing that stands in Brock Lesnar’s way of taking the title away from Randy Orton or John Cena is The Big Show. Heyman says this is a dawning of a new era in which Brock the Unmerciful emerges.

We go back to the expert panel of Jim Duggan, Shawn Michaels, and Ric Flair. They talk about the upcoming match between Brock Lesnar and The Big Show. Flair says he picks Lesnar all day long. Lesnar goes to swing the chair, but Show connects with the KO Punch. Lesnar and Show are both down, but Show gets to his feet. Lesnar rolls to the outside, and Show goes after him. Show backs Lesnar into the barricade and then delivers a shot to the midsection. Show tosses Lesnar back into the ring and the delivers another shot to the midsection. Lesnar ducks and delivers the F-5 for the win.
Winner: Brock Lesnar.

After the match, Lesnar continues to beat down Show with the chair.

We see The Shield backstage. Ambrose says they have 27 enemies against them tonight. He says they will dump all 27 over the top rope. Reigns says the three of them will remain and Rollins says then it will truly be every man for themselves. Reigns says he is feeling confident and he has the winning number. Ambrose asks him his number, but Reigns doesn’t tell him. Ambrose and Reigns argue, but Rollins calms them down. After the match, The Wyatt Family enters the ring. The Family beats down Cena in the ring. Bray Wyatt drops Cena with Sister Abigail and kneels over Cena as the crowd chants “YES!”

We see a video package for the WWE Network.

We go backstage with Renee Young and The New Age Outlaws. Road Dogg tells her how to introduce them. We see highlights of the Outlaws winning the WWE Tag Team Championship from Cody Rhodes and Goldust earlier today.

We see a video preview for the Elimination Chamber pay-per-view.

We then see a video of different Superstars saying how they will win the Royal Rumble Match. Punk and Rollins battle into the corner and then Punk kicks Rollins in the midsection. Rollins splashes Punk in the corner, but Punk comes back with a high knee. Damien Sandow enters number 3.

Sandow goes after Punk, but Punk fights back. Rollins and Sandow double-team Punk, but Punk drops both with a neck-breaker and a DDT. Cody Rhodes enters number 4.

Punk goes after Kane, but Kane drops him with an uppercut. Kane stomps Punk down in the corner. Kane drops Punk with a sidewalk slam and goes for the choke slam. Punk kicks Kane in the head and eliminates him. Alexander Rusev enters number 6.

Rusev goes after Rollins and then tosses him onto the apron. Rusev takes down Rhodes and Punk and stands tall in the ring. Jack Swagger enters number 7.

Swagger hits the Swagger Bomb on Rollins and Rhodes. Rusev and Swagger slug it out and Rusev smashes Swagger in the corner. Rusev goes to eliminate Swagger, but Rollins takes out Rusev’s knee. Kofi Kingston enters number 8.

Goldust goes after Rollins and drops him with a clothesline. Goldust drops Uso with an atomic drop. Rusev takes Goldust down. Rhodes and Punk attack Rusev. Rhodes and Rollins lead the group and eliminate Rusev. Kingston gets knocked out of the ring, but Rusev catches him and places him on the barricade. Kingston launches from the barricade and lands on the apron and gets back into the ring. Dean Ambrose enters number 11.

Nash eliminates Swagger. Nash goes after Ambrose and Rollins and then kicks Rhodes. Nash goes to eliminate Ambrose, but Ambrose holds on. Roman Reigns enters number 15.
Reigns dropkicks Punk and spears Rhodes and then squares off with Nash. Reigns gets Kingston and throws him over the top rope for the elimination. Reigns Spears Ziggler and eliminates him and then eliminates Nash. The Great Khali enters number 16.

The Shield come back against Sheamus and The Miz almost eliminates Ambrose. Miz goes after Reigns, but Ambrose and Rollins make the save. Fandango enters number 19. Fandango and Miz go after each other before everyone begins to brawl. Reigns stomps down on The Miz in the corner. El Torito enters number 20.

Torito takes down Rollins with a hurricanrana. Punk stops him, but Torito takes him down with a head-scissors. Fandango goes after Torito, but Torito eliminates Fandango. Reigns gets Torito and eliminates him. Antonio Cesaro enters number 21.
Cesaro hits Miz with the Cesaro Swing, then gets Punk with it, but Rollins and Ambrose break it up. Cesaro swings Rollins. Luke Harper enters number 22.

The final three are Batista, Roman Reigns, and Sheamus are the final three. Kane choke slams Punk through the announce table. Sheamus drops Reigns and then Batista and Sheamus battle it out. Batista clotheslines Sheamus in the corner and then drops Reigns with a power slam. Sheamus goes after Batista and drops him with the Plunge. Sheamus goes for the Brogue Kick, but Batista ducks. Reigns eliminates Sheamus to break the record. Batista tries to eliminate Reigns, but Reigns hangs on. Reigns and Batista slug it out and Reigns drops Batista with a clothesline. Reigns sets up for the Superman Punch, but Batista counters with a Spear. Batista sets up for the Batista Bomb, but Reigns counters with a Spear. Reigns grabs Batista and goes to eliminate him, but Batista reverses and tosses Reigns out for the elimination.
Winner of the 2014 Royal Rumble Match: Batista.