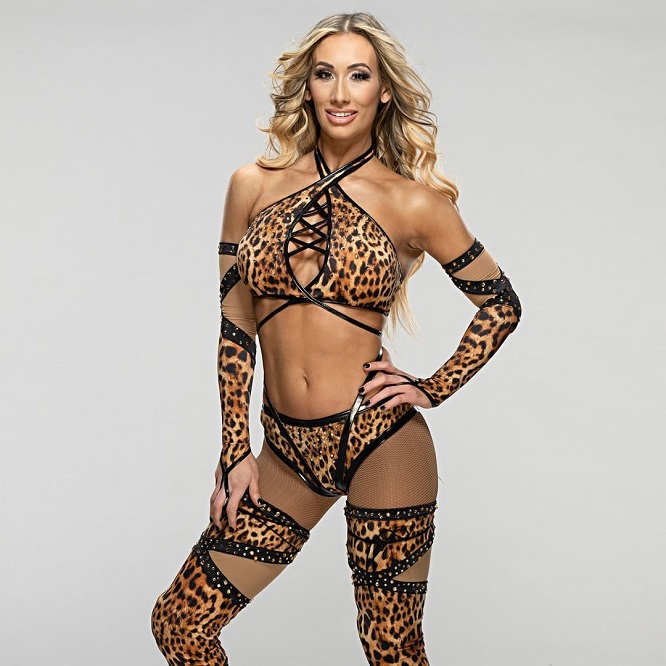 – Prior to starting her wrestling career, Van Dale worked as a cheerleader and personal trainer
– Van Dale was a Laker Girl for the 2011-12 season
– In June 2013, Van Dale signed a WWE development deal
– In December 2013, Van Dale was given the ring name Carmella
– On September 4, 2014, Carmella made her NXT debut in a backstage segment with Enzo Amore & Colin Cassady
– On October 16, 2014, Carmella made her in-ring debut, defeating Leva ‘Blue Pants’ Bates
– On October 30, 2014, Carmella defeated Emma
– In the 2016 WWE draft, Carmella was allocated to Smackdown
– In January 2017, Carmella formed an allegiance with James Ellsworth
– At Backlash ’17, Natalya, Carmella & Tamina defeated Becky Lynch, Charlotte & Naomi
– Carmella won the first ever womens’ Money In The Bank Match, defeating Becky Lynch, Charlotte Flair, Tamina & Natalya, though it was James Ellsworth who retrieved the briefcase on her behalf
– At Fastlane ’18, Natalya & Carmella defeated Becky Lynch & Naomi
– On the Smackdown following WrestleMania 34, Carmella cashed in her Money In The Bank contract and defeated Charlotte Flair to win the Smackdown Womens Title
– At Backlash ’18, Carmella defeated Charlotte to retain the Smackdown Womens Title
– At Money In The Bank ’18, Carmella (with an assist from James Ellsworth) defeated Asuka to retain the Smackdown Womens Title
– At Extreme Rules ’18, Carmella (with another Ellsworth assist) defeated Asuka to retain the Smackdown Womens Title
– In late 2018, Carmella began a partnership with R-Truth
– At TLC ’18, Truth & Carmella defeated Alicia Fox & Jinder Mahal to win the second season of Mixed Match Challenge
– Carmella won the Womens Battle Royal on the WrestleMania 35 pre-show
– In the fall of 2019, Carmella was often in and around the 24/7 Title, either as champion, challenger, or assistant to perennial title-chaser R-Truth
– The partnership between Truth and Carmella was abruptly ended after Truth was drafted to Raw in late 2019
– Carmella took time off from WWE following Money In The Bank 2020, returning to action with a new gimmick in October