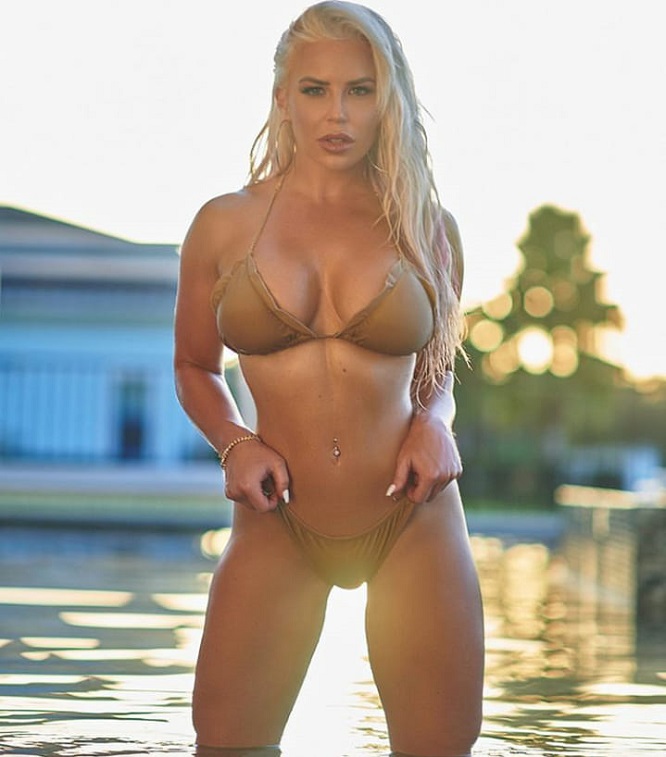 – Prior to her wrestling career, Sebera competed (at various times) in diving, gymnastics and bodybuilding
– In June 2013, Sebera signed a WWE developmental deal and was given the ring name Dana Brooke.
– Brooke made her TV debut at NXT Takeover Fatal 4-Way, appearing in a backstage segment with Tyler Breeze
– Brooke made her in-ring debut on September 18, 2014, teaming with Bayley in a loss to Sasha Banks & Alexa Bliss
– Brooke made her televised in-ring debut on the April 15, 2014 edition of NXT, defeating Blue Pants
– Later that month, Brooke formed an alliance with Emma
– In October 2015, Brooke would suffer an injury that would keep her out of action until the new year
– On February 19, 2016, Brooke returned to in-ring action, teaming with Emma at an NXT live event to defeat Sara Lee & Aaliyah
– Brooke was called up to the main roster in May 2016
– At Money In The Bank ’16, Charlotte & Dana Brooke defeated Natalya & Becky Lynch
– In the 2016 WWE draft, Brooke was allocated to Raw
– Beginning in 2019, Brooke became a regular performer on WWE’s B-Show ‘Main Event’, often competing against fellow overlooked talent Sarah Logan
– In late 2019, Brooke was drafted to Smackdown
– In late 2020, Brooke was drafted back to Raw
– In 2021, Brooke formed a short-lived tag team with Mandy Rose, before the latter was repackaged in NXT
– In 2022, Brooke became the cornerstone of the WWE 24/7 Title scene