Hell in a Cell 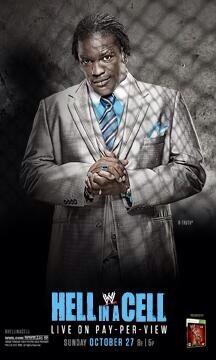 Hell in a Cell Kickoff kicks off with Josh Mathews welcoming us to the show and introducing the Superstar Panel, which consists of Dolph Ziggler, R-Truth, and Kaitlyn. Ziggler says he is intrigued by John Cena’s return, Truth says he is looking forward to a new WWE Champion being crowned, and Kaitlyn says Daniel Bryan and AJ Lee could be the new Power Couple by the end of the night. Josh Mathews sends it to Renee Young in the Social Media Lounge. Renee tells us to vote for Mr. Hell in a Cell. Our choices are Triple H, Shawn Michaels, Mick Foley, The Undertaker and Randy Orton.

We go backstage and we see The Miz talking to Vickie Guerrero. Miz says he wants Bray Wyatt in a match tonight, and Vickie says he is no medically cleared to compete, so no. Miz says he guesses there will be a fight and walks away.

Back with the Superstar Panel, and Big E. Langston has joined the panel. They talk about the Handicap Hell in a Cell Match, which will pit the team of Paul Heyman and Ryback against CM Punk.

Josh Mathews informs us that the Triple Threat Match for the WWE Tag Team Championship will kick off the show. The Shield joins the Panel for an interview. Rollins says it is an injustice that they didn’t get a straight up rematch against The Rhodes Family and it’s an injustice that they wouldn’t have even lost if it weren’t for The Big Show. Roman Reigns says their bond is stronger than the other two teams and everybody always needs to believe in The Shield. Langston brings up the fact that Dean Ambrose is always helping Reigns and Rollins and challenges Ambrose for the U.S. title. Ambrose says Langston doesn’t deserve it, but Langston keeps pushing. Ambrose grants Langston his wish.

Damien Sandow vs. Kofi Kingston
Kingston controls the match early on and tosses Sandow out to the floor. Kingston goes out after him and tosses him back into the ring at the five count, but Sandow takes control. Sandow stomps away on Kingston as we head to a “commercial” break.
We’re back and Sandow is still in control of the match. Sandow delivers a few right hands to Kingston’s midsection and then delivers an elbow shot. Sandow takes Kingston down with a hip toss and goes for a leg drop, but Kingston moves out of the way. Kingston sends Sandow to the corner and charges, but Sandow gets his boot up and sends Kingston down to the mat. Sandow stands on the ropes, but Kingston takes him down with a head-scissors take down. Kingston connects with the Boom Drop. Kingston sets up for Trouble in Paradise, but Sandow counters. Kingston comes back with a cross-body from the top rope and goes for the cover, but Sandow kicks out at two. We see Rey Mysterio calling the action at the Spanish announce table. Sandow slams Kingston down to the mat with the You’re Welcome and gets the pin fall.
Winner: Damien Sandow.

We go back to Renee Young in the Social Media Lounge and she reads a few tweets from the WWE Universe. She reveals the winner of the Mr. Hell in a Cell vote, and The Undertaker wins in a landslide.

Josh Mathews closes the show as the camera pans upwards and we see the Hell in a Cell structure hanging high above the ring.

We see an opening video to hype the Hell in a Cell Match and the big feuds going into tonight’s pay-per-view. We go live into the arena in Miami, Florida, where Michael Cole, Jerry Lawler, and John Bradhsaw Layfield welcome us to the show. The Miz’s music hits and he makes his way to the ring. He cuts a promo on The Wyatt Family and he calls Bray Wyatt to the ring. We see Bray Wyatt appear on the Titan Tron. Wyatt tells Miz that he feels sorry for him because he can’t see the monster that lives behind his eyes. The lights go out in the arena and come back on, and Luke Harper and Erick Rowan are in the ring. Rowan and Harper begin beating down The Miz. Kane’s music hits and he comes to the ring to make the save. Kane clears the ring of Harper and Rowan. Kane then delivers a choke slam to Miz.

Mixed Tag Team Match: Fandango and Summer Rae vs. The Great Khali and Natalya.
Fandango and Khali start the match off and Khali tosses Fandango down to the mat. Khali delivers a big chop to Fandango. Natalya and Summer get into the ring and Natalya takes Summer down. Summer comes back and gets a quick cover attempt, but Natalya powers out at one. Summer takes Natalya down with a dropkick. Fandango gets into the ring and Natalya tries to lock the Sharpshooter on him, but he gets away. Khali slams Fandango down to the mat, but Fandango comes back and takes Khali down. Natalya slaps Fandango across the face and Khali gets to his feet. Fandango tags in Summer and Natalya comes into the ring. Natalya takes Summer down with a suplex and then a clothesline. Natalya goes for the Sharpshooter, but Summer gets to the ropes. Summer gets a roll up on Natalya and gets the pin fall.
Winners: Summer Rae and Fandango.

We go to the expert Superstar panel, and Kaitlyn says she was excited to see some Divas action in that last match. Truth says he loved the Triple Threat for the tag titles. Miz says he was shocked that The Miz called out The Wyatt Family the way he did.

Before the match, Paul Heyman, coming to the ring on a motorized blue cart, cuts a promo. Heyman says he is Satan in the WWE and Ryback is going to collect CM Punk’s soul. Heyman gets on top of the Cell structure and says he has risen to the top and he owns CM Punk. We see the video package for WWE’s partnership with the Susan G. Komen Foundation for breast cancer research.

We go backstage and we see Renee Young and her guest is Daniel Bryan. Bryan says all he has ever wanted was a shot to be the WWE Champion, and he hopes that Shawn Michaels will be a fair and impartial referee. Bryan says he will reward the city that started the “YES” chants with a victory tonight. Los Matadores (Diego and Fernando) (w/El Torito) vs. The Real Americans (Antonio Cesaro and Jack Swagger) (w/Zeb Colter)
Cesaro and Diego start the match and Cesaro takes him into the corner. Diego takes Cesaro down with a head-scissors, but Cesaro comes back and tosses Diego to the outside. Cesaro tags in Swagger, who beats down Diego on the outside. Swagger tosses Diego back into the ring and connects with the Swagger Bomb. Swagger goes for the cover, but Diego kicks out at two. Swagger delivers a series of knees to Diego and drops him with a clothesline. Swagger tags in Cesaro, who puts Diego in a headlock down on the mat. Diego comes back with a back elbow and then sends Swagger over the top rope. Cesaro stops Diego from making the tag and kicks Fernando off the apron. Cesaro grabs Diego and swings him THIRTY-ONE times! Cesaro goes for the cover, but Diego kicks out at two. Diego comes back and kicks Cesaro in the head. Swagger and Fernando tag in. Fernando takes Swagger down and goes for the cover, but Cesaro breaks it up. Fernando goes up top and dives off, but Swagger moves. Swagger grabs Fernando and locks in the Ankle Lock, but Fernando gets free. Fernando and Diego double-team Swagger and Diego gets the pin.
Winners: Los Matadores.
After the match, Zeb Colter gets into the ring, but El Torito takes him down and kicks him out of the ring, followed by Swagger.

We see John Cena’s return video and the hype package for his match with Alberto Del Rio. We go to the Superstar Panel and they talk about John Cena’s win. Dolph Ziggler says he wants the next shot and Kaitlyn says this is Brie Bella’s shot to prove AJ Lee wrong. WWE Divas Championship Match: AJ Lee (w/Tamina Snuka) vs. Brie Bella (w/Nikki Bella)
AJ takes control of the match, but Brie sweeps AJ’s leg and takes her down. Brie goes for the cover, but AJ kicks out at one. AJ sends Brie to the outside and Brie hits the barricade. AJ goes out after Brie and tosses her back into the ring. AJ goes for the cover, but Brie kicks out at one. AJ locks in a headlock in the center of the ring and then slams her down hard. AJ skips around the ring and picks Brie up, but Brie fights back. AJ gets Brie in a front-face lock, but Brie backs her into the corner and AJ hits her head on the turnbuckle. Brie takes AJ down with a dropkick. Brie takes AJ down with a series of dropkicks now and goes for the cover, but AJ kicks out at two. AJ goes for the Black Widow, but Brie counters and locks in the Half Crab submisison. Nikki and Tamina fight on the outside as AJ makes it to the ropes. Brie charges at AJ, but AJ moves and Brie hits Nikki. AJ locks in the Black Widow and Brie taps out.
Winner and still WWE Divas Champion: AJ Lee.

We see The Prime Time Players playing WWE 2K14 backstage when Bob Backlund walks up. He yells that kids should be doing homework and other important things rather than playing video games. Titus says kids can become immortal if they play WWE 2K14. They do the ‘Millions of Dollars’ dance with Backlund to end the segment.

We see the video hype package for the feud between Daniel Bryan and Randy Orton. Hell in a Cell Match for the vacant WWE Championship (w/Shawn Michaels as the Special Guest Referee): Daniel Bryan vs. Randy Orton

Hell in a Cell comes to a close with Randy Orton and Triple H standing tall in the ring as trainers and referees help Daniel Bryan to his feet on the outside.