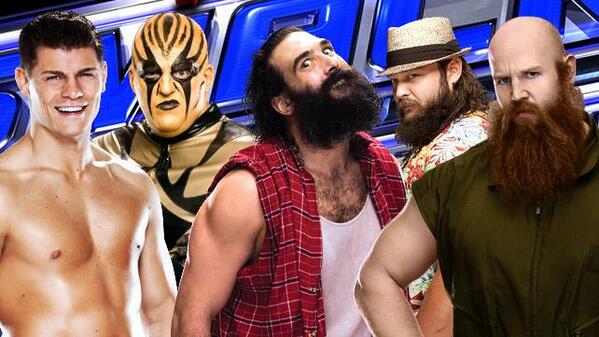 The show kicks off with Vickie Guerrero talking about the World Heavyweight champ, Alberto Del Rio. She touches upon Big Show being fired. Del Rio comes out and tries to get out of the match with Cena at Hell In A Cell. Damien Sandow comes out and says that Del Rio knows he’ll lose to Cena. Vickie makes a match between the two and Del Rio attacks Sandow.

R-Truth starts off looking strong as Axel tries to buy himself time outside the ring. We return from a commercial break to Axel dominating Truth. Chinlock from Axel. Truth starts the big comeback Clotheslines and a spinning kick from Truth. Truth with the scissors kick but Axel grabs the rope at two. Neckbreaker from Axel for the win.

Some fun tag moves from Matadores before the locals take control for a short time. Los Matadores get the win off of a double samoan drop tag move.

Real random teams here. Everybody is a face…it seems. Powerslam from Kaitlyn to Cameron. Lots of chain wrestling. Naomi with a reversed roll up on Kaitlyn for the win.

Sandow starts off with some offense but Del Rio takes over. Kicks to the back from Del Rio. Headlock from Del Rio. Sandow back in it and hits a knee drop to Del Rio. Del Rio with some strong elbows to the head of Sandow. Sandow knocks Del Rio out of the ring. Del Rio goes for the step up enziguri in the corner but Sandow dodges it and hits a flipping neckbreaker for two. Del Rio with a cheap shot to the knee of Sandow, followed by the cross armbreaker which Sandow taps out to.

Darren Young with quite a bit of offense on Jinder. McIntyre and Slater make quick tags and work over Young. Hot tag to Titus O’Neil. Titus cleans house. Titus tags in Khali and Khali hits the brain chop on Slater for the win.

Harper and Goldust start off but Rowan quickly enters. Cody gets the tag and works over Rowan before eating a big shoulder block. As we return from the break, the Wyatt Family is beating down Goldust. Bearhug from Rowan after a few minutes of attacks from him and Harper. Goldust makes the tag and Cody goes off. Disaster Kick to Harper. Rhodes hits a diving cross body from the top rope to the outside on Rowan. Big boot to Rhodes from Harper. Cody jumps over Harper in the corner and rolls him up for the win!

Cody and Goldust celebrate at the ramp while Bray, Harper & Rowan look angry.