Webmaster induction into the GERWECK.NET Hall of Fame 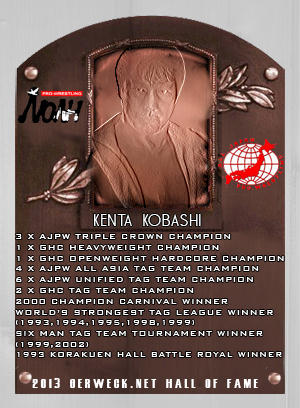 I am honored today to make the only sixth webmaster induction into the GERWECK.NET Hall of Fame – Japanese legend Kenta Kobashi. Unfortunately for many wrestling fans in the United States, many of us missed the opportunity to see one of the greatest technical wrestlers in the history of the business. Unless you were taping trading during his career, you probably missed classics such as his matches with Mitsuharu Misawa, Jun Akiyama, Kensuke Sasaki, Toshiaki Kawada, fellow GERWECK.NET hall of famer Stan Hansen, the late “Dr. Death” Steve Williams, Samoa Joe, etc. The Wrestling Observer Newsletter honored Kobashi with wrestler of the year honors in 1996, 2003, 2004, and 2005 and was inducted into the Observer hall of fame in 2002. Kobashi retired from the ring in May. Today, Kenta Kobashi is officially inducted into the GERWECK.NET Hall of Fame!