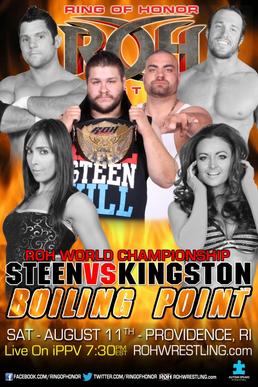 1. Roderick Strong (w/Truth Martini) beat Mike Mondo. During the match Strong locked on the No Lock, which the crowd took to start chanting “YES!” during. They appear to not watch SmackDown either.

2. God’s Gift defeated Vinny Marsaglia, Matt Taven and Antonio Thomas in a 4-corners match to earn a ROH Contract. The first three men are regulars with the local Top Rope Promotions company, while Thomas was one of the Heart Throbs.

Before the next match Brutal Bob Evans delivered a promo, saying Mike Bennett and Maria let him talk. He then made a few sexual innuendos that had my friend Matt laughing all night. Well, to each their own.

3. Adam Cole beat Bob Evans in a Proving Ground Match. Match was easily the worst of the night and Cole made Evans submit to the Figure Four.

Before the next match The House of Truth came back out. Truth Martini said Rhino would win the ROH Title at Death Before Dishonor. Michael Elgin then said he would win the title from Rhino. Roderick Strong implied that Truth told him that Roderick would get Elgin’s title shot. Strong quit the House of Truth and left the ringside area.

4. Charlie Haas pinned Michael Elgin (w/Truth Martini). Strong came out with a 12-pack of beer to watch the match from the aisle way. Towards the end of the match Haas and Strong shared a beer, before Elgin knocked them both over. Elgin then had the audacity to waste two perfectly good beers. Back in the ring Haas rolled him up.

6. Jay Lethal took 2 out of 3 falls from Tomasso Ciampa. The first fall was really quick and the second didn’t last much longer. During the third fall Prince Nana ran down and attacked RD Evans, who was in Ciampa’s corner, leading to Lethal hitting a back handspring Diamond Cutter for the win.

7. Eddie Edwards & Sara Del Ray defeated Mike Bennett & Maria in a mixed tag when Edwards submitted Bennett with the Rolling Half Crab. Del Ray chased Maria under the ring and came out with Maria’s top. After the match Bennett grabbed the ring announcers jacket, covered up Maria and carried her away as the fans gave Sara a big farewell.

8. Kevin Steen pinned Eddie Kingston to keep the ROH Title in a No Disqualification Match. I don’t believe there was a person in Providence who thought the title was changing hands tonight. Steen set up a table between the ring apron and the barricade and slammed Kingston through. They sold this like it was the end of the match, with referees and paramedics coming down to take Kingston away. While they did this, Steen took the mic and threatened some fans to get in the ring. While Kingston was being rolled away Steen said something to the effect of “Larry Sweeney is disappointed in you”, which caused Kingston to rise from the grave to fight more. After some more brawling, Steen gave Kingston an F-5 onto two chairs for the win.

After the match Steen got into an argument with a fan at ringside and punched him out. I would have to assume it was a plant.