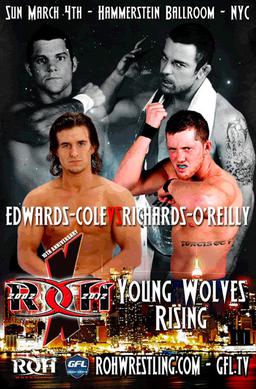 Live from the Manhattan Center in New York City

– Briscoes passing through the crowd. “Man Up” chants.

– The All Night Express (Kenny King and Rhett Titus) defeated The World’s Greatest Tag Team (Charlie Haas and Shelton Benjamin) in 13:35 after a prawn hold by King on Benjamin.

– Mike Bennett defeated Homicide in 10:25 with a roll up and handful of tights. Before the finish, Homicide hit Bennett with a Go 2 Sleep and threw up a straight edge symbol for the crowd in tribute to CM Punk. Post match, Homicide ran down Bennett, Bob Evans and Maria Kanellis and the NYC fans.

– Eddie Kingston out, (introduced as Chikara Grand Champion) Kevin Kelly announces ROH will co-promote with various promotions, the first at 4/21 with Chikara in New Jersey. Kingston was beginning to discuss Davey Richards, when Kevin Steen interrupts, carrying a tennis racket with Davey Richards picture on it. Steen says it is good to see Kingston and asks when did Kingston become such a bitch for praising ROH. Steen says Kingston is cut from the same cloth as he is and people would love to see them together. Kingston says he doesn’t want to destroy anything. Steen says Chikara is a Mickey Mouse bs promotion and he will be the next ROH champ. Kingston says he lost everything for Chikara. Steen and Kingston fight but then are broken up by security and wrestlers. Steen appears to attempt to urinate on the Chikara belt, but Jigsaw, Green Ant and Fire Ant chase off Steen.

– The House of Truth (Roderick Strong and Michael Elgin) defeated TJ Perkins and Amazing Red after an Alabama Slam by Elgin into a Backstabber by Strong. Fall in 11:10.

– Jay Lethal and Tommaso Ciampa went to a 15 minute draw. Lethal retains the TV title. Ciampa lays out Lethal post match and walks off with the TV title.

– The Briscoe Brothers (Mark and Jay) defeated The Young Bucks (Matt and Nick Jackson) in 13:11 when The Briscoes hit the Doomsday Device on Nick to retain the ROH World Tag Team Titles.

– As the Kevin Steen-Jimmy Jacobs match is about start, Steve Corino says this has gone on far too long and it’s time to move on. The more we chant for Steen the further this company goes down and there will be no match. Steen says he is disappointed when Jacobs attacks Steen to Corino’s disappointment. Jacobs, dressed in street clothes, takes off his jacket to reveal the blood soaked jacket worn when the Age of the Fall was formed.

– Kevin Steen defeated Jimmy Jacobs in 14:49 after using Jacobs’ Spike to hit Jacobs in the groin, and following it up with an F5 on two steel chairs.

– Eddie Edwards and Adam Cole defeated Davey Richards and Kyle O’Reilly in 39:37 after a top rope bodypress by Cole on Richards. Post match, Kevin Steen interrupted a post match promo by the participants. Steen ran down Richards, and the real main event should have been Steen-Richards for the belt. Steen asked Richards to get him a title shot or he’d hunt him down.