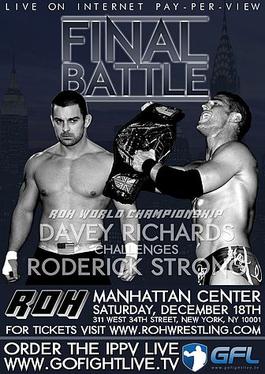 Results from the Manhattan Center in NYC:

– The All-Night Express (Rhett Titus and Kenny King) defeated Kyle O’Reilly and Adam Cole after a Blockbuster from Titus out of a King Powerbomb.

– Colt Cabana defeated TJ Perkins in 7:55 after a sunset flip.

– Eddie Edwards defeated Sonjay Dutt in 10:44 with a powerbomb into a fisherman suplex.

– Homicide defeated Christopher Daniels in 10:44 after a Stunner. Before the match, “The Prodigy” Mike Bennett came out to watch the match.

– Roderick Strong defeated Davey Richards in 30:30 after Richards passed out while Strong had him in the Walls of Jericho. Strong retains the ROH World title. Ring announcer states Richards has a possible concussion and appreciates our patience.