Poll results – Should Jesse “The Body” Ventura be inducted into the GERWECK.NET Hall of Fame?

As a result of voting:

Should Jesse “The Body” Ventura be inducted into the GERWECK.NET Hall of Fame? 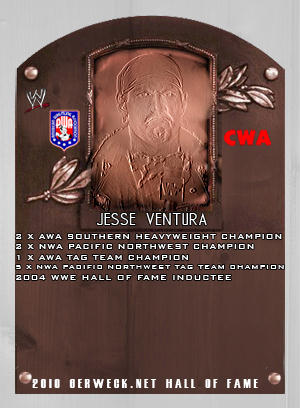 “The Body” is inducted into the GERWECK.NET Hall of Fame.

The GERWECK.NET Hall of Fame is intended to include the elite members of the wrestling community that deserve to be inducted into a prestigious hall of fame without prejudice or politics. Areas of consideration for induction should include (but not be limited to) a wrestlerâ€™s drawing power, wrestling ability, impact or influences on the business, longevity, and passion/drive for the industry. Non-in ring performers (such as promoters, announcers, referees, etc.) should also be judged by a similar criterion, based on the highest standards for their areas. Remember, this is not a popularity contest. This hall of fame will only include the best of the best. Readers should e-mail halloffame@gerweck.net with names of candidates worthy of consideration. The name with the highest number of suggestions will be considered for voting the following month. Thus, twelve names will be considered per year, and the number of inductees for the year is totally up to the GERWECK.NET readers. If a subject doesnâ€™t qualify for induction, he or she will remain off the consideration list for twelve months. If a subject receives 70% or higher, he or she will be inducted.