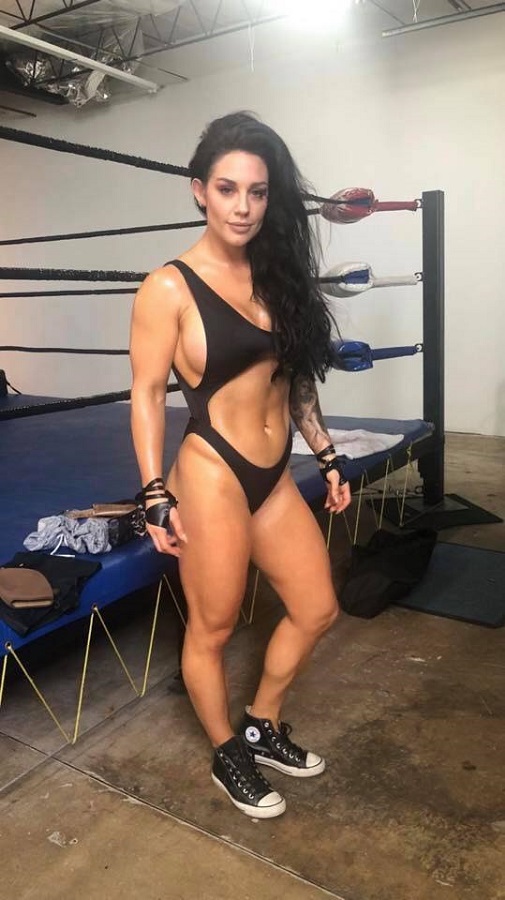 – Bonin was a regular in fitness and bodybuilding competitions from the age of 19
– In July 2010, Bonin signed a development deal with WWE, reporting to FCW
– On September 9, Bonin (as Kaitlyn) made her FCW in-ring debut, teaming with Leo Kruger in a loss to Brad Maddox & Jamie Keyes
– On season three of NXT, Kaitlyn replaced Aloisia as Vickie Guerrero’s rookie and would go on to win the competition in November 2010
– In December 2010, it was announced that Kaitlyn had (in storyline) signed with the Smackdown brand
– Kaitlyn wrestled her first Smackdown match on January 25, 2011, teaming with Kelly Kelly in a loss to LayCool (Michelle McCool & Layla)
– In October 2011, Kaitlyn returned to NXT for the ‘Redemption’ season
– At Money in the Bank 2012, Layla, Kaitlyn & Tamina Snuka defeated Beth Phoenix, Natalya & Eve Torres
– On the January 14, 2013 episode of Raw, Kaitlyn defeated Eve Torres to win the WWE Divas Title
– At Elimination Chamber 2013, Kaitlyn defeated Tamina Snuka to retain the WWE Divas Title
– On the February 21, 2013 episode of NXT, Kaitlyn defeated Natalya to retain the WWE Divas Title
– On the March 21, 2013 episode of NXT, Kaitlyn defeated AJ Lee to retain the WWE Divas Title
– In January 2014, Kaitlyn left WWE and stated that she would be returning to the fitness industry
– In July 2014, Bonin announced that she was officially retired from the wrestling business
– In February 2018, Bonin made a surprise return to in-ring competition, defeating Rachel Ellering at a Coastal Championship Wrestling event in Florida
– Kaitlyn participated in the 2018 Mae Young Classic tournament in August 2018, defeating Kavita Devi before losing to Mia Yim in the second round
– On October 27, 2019, Bonin defeated Katie Forbes & Black Widow in Pretoria, South Africa to become the first SFA Womens Champion