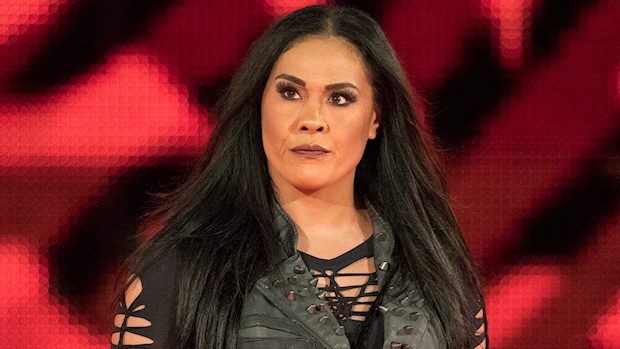 – WWE signed Snuka, the daughter of WWE hall of famer Jimmy “Superfly” Snuka, to a developmental deal.
– Snuka debuted on the May 25, 2010 edition of “Raw,” managing Rikishi’s sons the Uso’s.
– Tamina was drafted to the Smackdown roster on April 26, 2011 during the WWE supplemental draft.
– Layla, Kaitlyn, and Tamina Snuka defeated Beth Phoenix, Natalya, and Eve Torres at the 2012 Money in the Bank.
– In May 2013, Tamina entered the NXT Womens Title Tournament, but was defeated in the first round by eventual tournament winner Paige.
– At WrestleMania XXX, Tamina competed in the 14-Diva “Vickie Guerrero Invitational” match for the WWE Divas Championship but was unsuccessful in capturing the title.
– On April 15, 2014, Tamina won a 10-Diva Battle Royal to become Number 1 Contender to the WWE Divas Title, but lost her title match to Paige.
– In June 2014, Tamina suffered a serious knee injury and was ruled out for the rest of the year.
– On May 4, Naomi debuted Tamina as her ‘bodyguard.’
– At Payback ’15, Naomi & Tamina defeated The Bella Twins.
– On July 13, Naomi formed Team BAD (Beautiful and Dangerous) alongside Tamina and the debuting Sasha Banks. The trio commenced a 3-way feud with Team Bella (Nikki, Brie & Alicia Fox) and Paige, Charlotte & Becky Lynch.
– In early 2017, Tamina returned to action on Smackdown after a prolonged period of injuries
– At Backlash ’17, Natalya, Carmella & Tamina defeated Becky Lynch, Charlotte & Naomi
– Tamina picked up an injury shortly after the 2018 Royal Rumble. She would undergo shoulder surgery to correct the problem
– In October 2018, Tamina returned to the Raw roster, where she would soon form an alliance with Nia Jax
– Tamina was part of the victorious Team Raw at Survivor Series ’18
– Tamina was absent from television for much of 2019
– In the run-up to WrestleMania 36, Tamina started appearing on the Smackdown brand
– In 2021, Tamina began teaming with Natalya
– On May 14, Natalya & Tamina defeated Nia Jax & Shayna Baszler to win the WWE Womens Tag Team Titles
– On May 17, Natalya & Tamina defeated Jax & Baszler to retain the WWE Womens Tag Team Titles
– On May 24, Natalya & Tamina again defeated Jax & Baszler to retain the WWE Womens Tag Team Titles