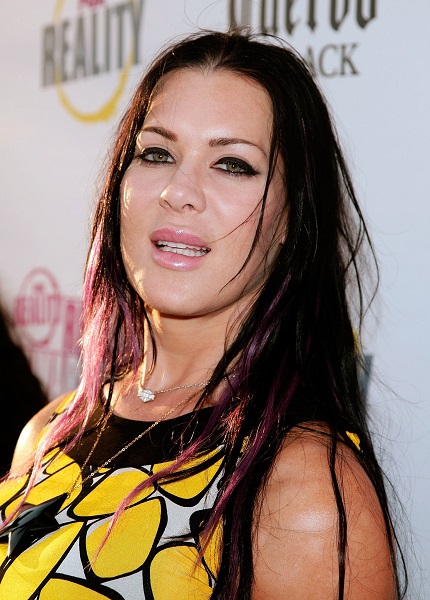 – When she was sixteen, Laurer left home, and went to Spain under a UN scholarship, to take part in a six-month study program. She liked it so much that she graduated from high school in Spain in 1987.
– Laurer graduated from the University of Tampa in 1992, with a double major in Spanish Literature.
– Laurer joined the Peace Corps and was assigned to Costa Rica to teach literacy.
– After college, Laurer entered fitness competitions.
– On September 14, 1996, Laurer competed in the New York City regional of the Fitness America Pageant.
– On September 28, 1996, Joanie Lee (Laurer) defeated Violet Flame for the IWF (International Wrestling Federation) Women’s title in Salem, NH.
– Laurer was named the PGWA (Pro Girls Wrestling Association) rookie of the year for 1996.
– Laurer had agreed to try her luck in a boxing match, when the WWF contacted her.
– Laurer made her first WWF appearance in February 1997 on Monday Night “Raw.” She made quite an impact in her debut, manhandling Marlena, Goldust’s then wife/manager.
– Triple H quickly hired Chyna to be his bodyguard.
– Steve Austin gave her a Stone Cold Stunner following the No Way Out PPV in February 1998.
– At Wrestlemania XIV, Chyna was handcuffed to then WWF Commissioner Sgt. Slaughter as Hunter Hearst Helmsley battled Owen Hart.
– Chyna was involved in a love angle with “Sexual Chocolate” Mark Henry.
– In spite, she brought in a cross dressing man named Sammy, and passed him off as a woman to trick Henry.
– The night after the 1999 Royal Rumble, Chyna turned on Triple H, joining Mr. McMahon’s Corporation in the process.
– Chyna made her WWF wrestling debut at the St. Valentine’s Day Massacre PPV, competing on a team with Kane against former DX allies Triple H and Syxx. Chyna and Kane were successful.
– At Wrestlemania XV, Chyna rejoined Triple H in the Corporation.
– At “Smackdown,” September 2, 1999, Chyna put her number one contender spot for the Intercontinental title up against Billy Gunn. During the contest the referee went down, shortly after Gunn nailed Chyna with the Famouser, Triple H then ran-in and nailed Gunn with the Pedigree, so that Chyna could pin him.
– Chyna defeated Jeff Jarrett for the Intercontinental title at the 1999 “No Mercy” in Cleveland, OH.
– A short time later, Miss Kitty became Chyna’s valet.
– After dropping the IC title to Chris Jericho, Chyna became Y2J’s valet.
– At Wrestlemania 2000, Chyna and Too Cool defeated the Radicals.
– The night after Wrestlemania, Chyna turned against Jericho, allowing Eddy Guerrero to capture the European title.
– On August 5, 2000, the Chyna comic book was released.
– At Summerslam 2000 in Raleigh, NC, Chyna and Guerrero defeated Trish Stratus and Val Venis in a mixed gender tag match. As a result of a pre-match stipulation, Chyna (who pinned Stratus) became the Intercontinental champion.
– Chyna agreed to marry Guerrero on the September 21, 2000 episode of “Smackdown.”
– On September 25, 2000, Playboy released the November issue featuring Chyna on the cover, which included a rather revealing pictorial of the “ninth wonder of the world.”
– After leaving “Latino Heat,” Chyna next turned her attention to Gunn.
– In January 2001, Chyna’s best selling book “If They Only Knew” was released.
– At Wrestlemania XVII in Houston, TX, Chyna easily defeated Ivory for the WWF Women’s title.
– Chyna retained the WWF Women’s title at Judgment Day ’01 by defeating Lita.
– In June 2001, it was announced that Laurer and the WWF had reached an impasse in contract negotiations. As a result, Laurer officially left the WWF when her contract expired on November 30, 2001.
– At New Japan’s 30th Anniversary show in Tokyo, Laurer officiated the Steiner brothers vs. Hiroshi Tanahashi and Kensuke Sasaki match.
– On September 6, 2002, Laurer, Justin McCully, and Shane defeated Masahito Kakihara, Jushin Liger, and Yuji Nagata in Kanazawa, Japan.
– In November 2007, Joanie Marie Laurer changed her name to Chyna.
– In May 2011, Chyna made her TNA debut.
– At Sacrifice ’11, Chyna and Kurt Angle defeated Karen and Jeff Jarrett.
– On March 29, 2015, Chyna was voted into the GERWECK.NET Hall of Fame.