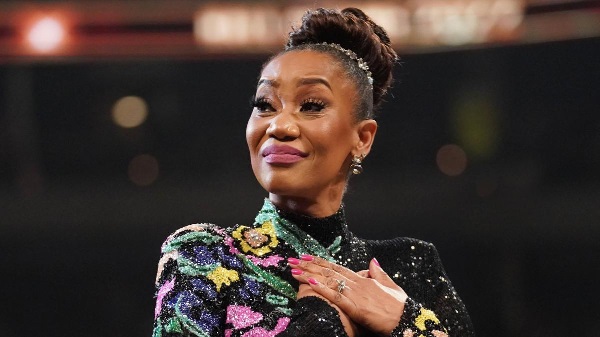 – In 1991, Sullivan was named Miss Black America.
– In December 1998, Sullivan appeared on WCW television as Nitro Girl Storm.
– The WCW Creative Team decided to make Sullivan The Artist Formerly Known as Prince Iaueka’s valet in late 1999, Paisley.
– On the December 9, 1999 edition of “Thunder,” Paisley slapped Oklahoma during an Iaueka-Vampiro match.
– Paisley got into a catfight with Torrie Wilson during a Kidman and Vampiro-Artist & La Parka match on the February 14, 2000 “Nitro.”
– At the WCW Superbrawl PPV, Paisley lead TAFKAPI over Lash Leroux to win the vacant WCW Crusierweight title.
– At the WCW Uncensored PPV, Paisley once again lead TAFKAPI over Psychosis.
– Paisley and Tammy Lynn Sytch got into a catfight after Tammy caused TKFKAPI the title to Chris Candido at Spring Stampede.
– On the April 24, 2000 edition of “Nitro,” Paisley saw her first in-ring match as she and The Artist fell to Candido and Sytch.
– On the April 26, 2000 edition of “Thunder,” Paisley avenged the lost by defeating Tammy after countering a Northern Lights Suplex into a DDT.
– On the June 12, 2000 edition of “Nitro,” Paisley announced that the Artist formerly known as Prince Iaukea would only be known as The Artist. On the same telecast, Paisley and Major Gunns got into a catfight after Gunns tried to use mouth to mouth recesitation on The Artist.
– On the June 21 edition of “Thunder,” Paisley and The Artist defeated Tygress & Rey Mysterio Jr. and Lt. Loco & Major Gunns in a mixed tag team three way dance.
– On the June 28, 2000 edition of “Thunder,” Paisley defeated Tygress.
– In late summer 2000, Paisley began to be infatuated by WCW costume designer Kwee Wee. When WCW released The Artist in August, Paisley became Kwee Wee’s valet.
– On the August 23 edition of “Thunder,” Paisley defeated Major Gunns after some help from Tygress.
– On the September 20 edition of “Thunder,” Paisley downed Torrie Wilson.
– Paisley competed in the WCW Bikini contest which was won by Pamela Paulshock on the September 25 edition of “Nitro.”
– On February 2, 2001, WCW announced it had released Major Gunns, Leia Meow, Paisley, Tygress, and Daffney.
– On September 7, 2001, the WWF announced that it had signed Sullivan to a contract.
– Sullivan was sent to OVW in late September 2001.
– On the November 22 edition of “Smackdown,” Sullivan (under her real name) interviewed Tazz.
– In April of 2002, Sullivan ripped her ACL while training.
– In summer 2002, WWE released Sullivan from her contract.
– On February 5, 2005, Sullivan married Booker T in Gary, IN. A short time later, Sullivan started to appear on “Smackdown” on a regular basis.
– Thanks to outside interference from Sharmell, Booker T defeated Chris Benoit on the October 21, 2005 episode of “Smackdown” to regain the U.S. title.
– On the June 11, 2007 edition of Raw, Queen Sharmell (and King Booker) was drafted to the Raw roster.
– On October 16, 2007, Sharmell and Booker T were released by WWE.
– Sharmell and Booker T debuted in TNA at the Genesis ’07 PPV.
– At Final Resolution ’08, Booker T and Sharmell defeated Robert Roode and Miss Brooks.
– At Lockdown ’08, Booker T and Sharmell defeated Roode and Payton Banks.
– On April 1, 2022, Sharmell was inducted into the WWE hall of fame.