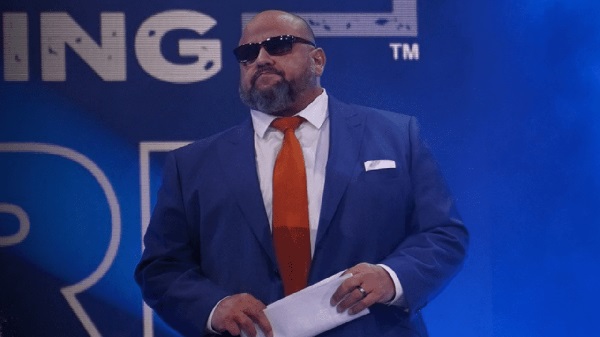 – Senerca made his pro wrestling debut in San Juan, Puerto Rico.
– Kevin Sullivan was instrumental in Senerca (then wrestling as the Tasmaniac) receiving Japanese bookings for the W*ING promotion.
– Senerca also toured the Orient with New Japan Pro Wrestling through a connection with Brad Rheighans.
– On January 3, 1993, Tazz defeated Flex Wheeler in the finals of a tournament for the New England Cruiserweight title in Windsor Locke, CT.
– Later in 1993, Tazz had a brief stint with Jim Cornette’s now defunct Smoky Mountain Wrestling promotion.
– In October 1993, Tazz made his ECW debut.
– Tazz, wrestling as the Tasmaniac, teamed with Sullivan to win the ECW World Tag Team title on December 4, 1993, by defeating Tommy Dreamer and Shane Douglas in Philadelphia, PA.
– The Tasmaniac and Sullivan defeated the Bruise Brothers (Harris Brothers) on March 5, 1994 for their second ECW World Tag Team title.
– The next night, the Tasmaniac won his first ECW television title from Sabu, but on the same night, lost it to J.T. Smith.
– The Tasmaniac and Sabu defeated the Public Enemy on February 4, 1995, to win the ECW World Tag Team title.
– In a match with 2 Cold Scorpio, Tazz suffered a broken neck. He was out of action for several months.
– Tazz defeated Paul Varleans, a former shoot fighter from the UFC, in a shoot fight at Hardcore Heaven ’96.
– Tazz was unable to wrestle at the 1996 November to Remember, but confronted 2 Cold Scorpio, who was leaving for the WWF. He simply said, “Bye-Bye Flash,” followed by an obscenity.
– Tazz defeated Sabu on April 13, 1997 at ECW’s inaugural PPV, when Sabu submitted to the Tazmission. Sabu and Tazz embraced after the match, until Rob Van Dam attacked Tazz, followed by Sabu. Alfonso took off his Tazz tee shirt, and proudly displayed a Sabu tee.
– Tazz defeated “The Franchise” Shane Douglas on June 7, 1997, to claim his second television title in Philadelphia.
– On September 11, 1997 in San Antonio, TX, Tazz defeated Chris Candido to retain the ECW Television title.
– Tazz successfully defended the Television title against Candido at Hardcore Heaven ’97, and at November to Remember ’97 against Pit Bull #2.
– On May 14, 1998, Tazz declared himself the FTW champion.
– Tazz pinned Douglas for the ECW title on January 10, 1999 at the Guilty As Charged PPV in Kissimmee, FL.
– At the Living Dangerously PPV on March 21, 1999, Tazz successfully defended the ECW title against Sabu.
– At Hardcore Heaven ’99, Tazz defeated Candido in one minute in a match scheduled to be the main event. Later in the show, Tazz beat Bubba Ray Dudley to again retain the ECW title.
– In September 1999, Tazz signed with the WWF.
– Tazz made his WWF debut at the 2000 Royal Rumble at Madison Square Garden in New York city, ending Kurt Angle’s unbeaten streak.
– On April 13, 2000, Tazz defeated Mike Awesome, who had signed with WCW, for the ECW title in Indianapolis, IN.
– At Fully Loaded 2000 in Dallas, TX, Tazz forced Al Snow to submit.
– During the summer of 2000, Tazz feuded with Jerry “The King” Lawler.
– At Unforgiven ’00, Tazz beat Lawler thanks to an Even Flow DDT from Raven.
– Tazz returned to ECW for the December 15, 2000 show in Queens, NY. He showed up to choke out heel referee Danny Daniels.
– At Wrestlemania XVII in Houston, TX, Tazz and the Acolytes defeated RTC (Goodfather, Bull Buchanan, and Val Venis) in a six-man tag team match.
– During the spring of 2001, Tazz, Al Snow, Jacqueline, and Tori served as trainers for MTV’s “Tough Enough.”
– On the July 9, 2001 episode of “Raw,” Tazz joined Paul Heyman in the recreation of ECW.
– On the January 7, 2002 edition of “Raw” in New York, NY, Tazz and Spike Dudley defeated the Dudley Boyz for the WWF World Tag Team title.
– Two weeks later at the Royal Rumble in Atlanta, GA, Tazz and Dudley beat the Dudley Boyz to retain the WWF World Tag Team title.
– At No Way Out ’02, Tazz and Dudley successfully defended the WWF World Tag Team title against Booker T and Test.
– On the June 9, 2006 edition of “Smackdown,” Tazz left the program to rejoin ECW.
– At One Night Stand ’06, Tazz choked out Jerry Lawler.
– Tazz finished up with WWE after the March 30, 2009 television taping in Dallas, TX.
– At Victory Road ’09, Taz debuted in TNA as Samoa Joe’s secret adviser.
– Taz was in Samoa Joe’s corner at Hard Justice ’09 when Joe pinned Homicide to win the X Division title.
– The next night, Taz replaced Don West in the TNA broadcast booth.
– In 2015, TNA and Taz parted ways.
– On January 16, 2020, it was announced that Taz had officially signed a multi-year deal with AEW, having made a few guest commentator appearances in the previous few months
– Taz formed a new stable in May 2020, recruiting Brian Cage as a member of Team Taz
– At Fyter Fest 2020, Taz awarded the FTW Championship to Brian Cage
– Taz recruited Ricky Starks as a member of Team Taz in July 2020
– In November, Taz added Will Hobbs (soon renamed Powerhouse Hobbs) to Team Taz
– In December, Taz’s real-life son Hook was added to the stable
– In August 2021, Taz permanently joined the announce team for Rampage