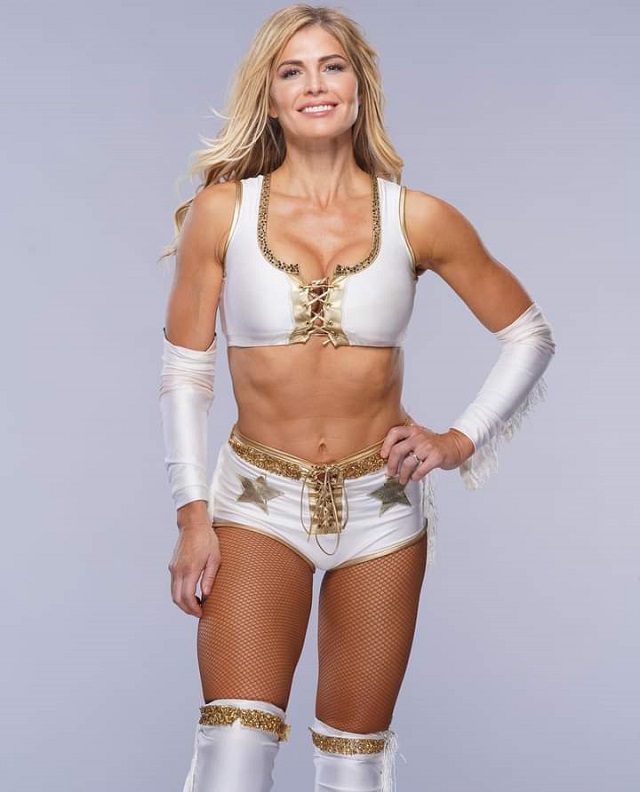 – Wilson debuted in WCW as the mysterious Samantha.
– Wilson slapped the face of the “Nature Boy” Ric Flair as he battled Hulk Hogan in the main event at SuperBrawl IX.
– At Uncensored ’99, Samantha and David Flair appeared to show their moral support for Hogan as he met the elder Flair in a “first blood” match.
– Weeks later, rumors circulated that Wilson was finished with WCW when she wasn’t given more input into her character.
– Wilson returned on May 17, 1999, and convinced Ric Flair to make sure that son David won his matches.
– On the June 29, 1999 edition of “Nitro,” Wilson helped Kevin Nash “kidnap” Randy Savage’s valet Gorgeous George.
– At the 1999 Bash at the Beach, Wilson was in David Flair’s corner when he defeated Dean Malenko for the U.S. title.
– On October 18, 1999, Wilson escorted the Filthy Animals (Kidman and Eddy Guerrero) to the ring as they captured the WCW World Tag Team title from Harlem Heat.
– Ric Flair kissed Wilson at the 1999 Halloween Havoc.
– Wilson videotaped the Filthy Animals as they dumped a seemingly “lifeless” Ric Flair somewhere in the Las Vegas desert.
– On the November 1, 1999 episode of “Nitro,” Wilson was placed in a shark cage as Guerrero squared off with Perry Saturn in a “key match.” Wilson used her belt to wrap around Saturn allowing Guerrero to free the blonde bombshell.
– Two weeks later, Wilson officiated a match between Asya and Kimberly Page wearing a rather revealing bikini.
– At Mayhem ’99, Wilson competed in an elimination match between the Filthy Animals and the Revolution. Wilson was the last surviving member of her team.
– The next night on “Nitro,” KidCam caught Wilson and Guerrero together in the dressing room.
– After a two month hiatus from television, Wilson returned on the January 19, 2000 edition of “Thunder,” helping Kidman beat The Artist.
– On the St. Valentine’s Day ’00 episode of “Nitro,” Wilson got into a “catfight” with Paisley.
– At SuperBrawl 2000, Wilson guided Kidman past Vampiro.
– Kidman and Booker T, with Wilson in their corner, defeated Harlem 2000 (Ray & Big T) at Uncensored 2000.
– On the May 17, 2000 episode of “Thunder,” Wilson received a smooch from Hulk Hogan.
– Wilson turned on Kidman during a G.I. Bro (Booker T)/Kidman match on June 5, 2000.
– At the 2000 Great American Bash, Wilson helped Hogan defeat Kidman to earn a WCW title shot.
– Wilson sided with “The Franchise” Shane Douglas at the 2000 Bash at the Beach, assisting him to defeat Buff Bagwell.
– Three nights later, Douglas and Torrie Wilson downed Crowbar and Daffney in a mixed tag match.
– At the 2000 Fall Brawl, Douglas and Wilson defeated Kidman and Madusa in a scaffold match in Buffalo, NY.
– The next night, Douglas and Wilson defeated Kwee Wee and Paisley.
– Despite signing a multi-year contract, WCW released Wilson from her $250,000 per year salary in December 2000.
– In June 2001, Wilson signed a contract with the WWF.
– Wilson made her WWF debut on the June 28, 2001 episode of “Smackdown.” She met with Vince McMahon and offered him her services, claiming her WCW contract was about to expire.
– The following week, Wilson led the WWF Chairman into a compromising position in front of his wife Linda.
– Thanks to interference from Stacy Keibler, Wilson defeated Trish Stratus in an arm wrestling match on the July 19, 2001 edition of “Smackdown.”
– On the July 23, 2001 episode of “Raw,” Wilson defeated Stratus in a “spanking” match.
– The following week on the same program, Wilson and “Hurricane” Helms defeated Matt Hardy and Lita in a mixed gender tag match.
– In late Summer 2001, the WWF linked Wilson with “The Japanese Buzzsaw” Tajiri.
– On the October 4, 2001 edition of “Smackdown,” Wilson defeated Keibler in a bikini contest.
– At the No Mercy PPV in St. Louis, MO, Wilson again defeated Keibler, this time in a lingerie match.
– At the Rebellion ’01 PPV in Manchester, England, Wilson and Lita defeated Mighty Molly and Keibler.
– On June 22, 2002, Wilson captured the Golden Thong award during the “WWE Divas: Undressed” special at the World in New York.
– At No Mercy ’02 in Little Rock, AR, Wilson defeated Dawn Marie.
– Wilson defeated Dawn Marie at the 2003 Royal Rumble, in the first ever stepdaughter vs. stepmother match.
– On March 28, 2003, Playboy released the May issue featuring Wilson on the cover.
– In June 2003, Wilson was paired up with Billy Gunn.
– On July 11, 2003, Wilson married Billy Kidman in Old Saybrook, CT.
– At Wrestlemania XX in New York, NY, Wilson and Sable defeated Stacy Keibler and Miss Jackie (Gayda).
– Wilson defeated Dawn Marie at the 2004 Judgment Day PPV.
– On the August 22, 2005 episode of “RaAw,” Wilson and Candice Michelle were traded to the brand in exchange for Christy Hemme and Stacy Keibler.
– At Wrestlemania 22, Wilson defeated Candice Michelle in a Playboy Pillow fight.
– On the June 11, 2007 edition of “Raw,” Wilson was drafted to the Smackdown roster.
– At the 2007 Survivor Series, Maria, Wilson, Mickie James, Michelle McCool & Kelly Kelly defeated WWE Women’s Champion Beth Phoenix, Jillian Hall, Melina, Victoria & Layla in a 10 Divas Tag Team Match.
– On May 8, 2008, WWE released Wilson.
– On April 6, 2019, Wilson was inducted into the WWE hall of fame.