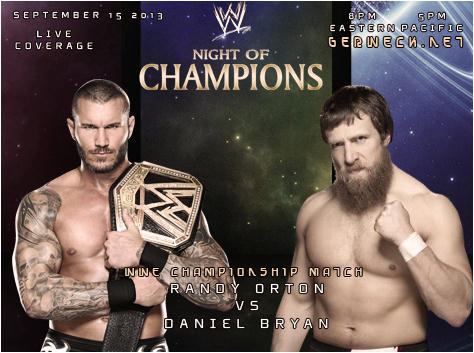 The Night of Champions Kickoff Show begins with a live shot inside the Joe Louis Arena in Detroit, Michigan as Josh Mathews welcomes us to the show. The Expert Superstar Panel tonight is Alex Riley, Booker T, and Santino Marella. Booker says he is looking forward to the WWE Championship Match between Randy Orton and Daniel Bryan. Marella says he is looking forward to the Elimination Handicap Match between the team of Curtis Axel and Paul Heyman and “The Best in the World” CM Punk. Riley says the winners of the Tag Team Turmoil will go on to defeat The Shield later tonight. Marella picks The Usos to win the match tonight, while Booker says it will be The Prime Time Players. Riley agrees with Marella and says The Usos will win it.

We go backstage and we see Paul Heyman. Brad Maddox walks up and asks him if he is okay. Heyman says he is not because Maddox put him in a match against CM Punk tonight. Heyman says Punk is going to find a way to get around Curtis Axel and get to him. Heyman says Punk is going to massacre him in the middle of the ring…unless Punk gets past Axel and Heyman punches the referee right in the mouth. Heyman says it would be an immediate disqualification and if Punk attacks him after the bell he could sue him. Maddox says that scenario is not best for business. Maddox says the match is now No Disqualification. #1 Contender’s (WWE Tag Team Championship) Tag Team Turmoil Match: 3MB vs. Tons of Funk vs. The Real Americans (w/Zeb Colter) vs. The Usos vs. The Prime Time Players
3MB and Tons of Funk are the first two teams, and Slater and Clay begin the match. Clay quickly tags in Tensai and Slater goes to the outside. McIntyre takes down Tensai and then gets him back into the ring. McIntyre goes for a cover, but Tensai kicks out at two. McIntyre pummels Tensai in the corner, but Tensai counters and pins McIntyre. 3MB is eliminated.
The Real Americans are the next team to enter the match as we head to a “commercial. We’re back and Cesaro is in control of Tensai. Tensai gets free and tags in Clay, who takes Cesaro down with a belly-to-belly toss. Clay splashes Cesaro and goes for the cover, but Swagger breaks it up. Clay slams Cesaro, but Swagger made the tag and locks in the Patriot Lock and Clay taps out. Tons of Funk is eliminated.
The Usos enter the match. The Usos are on fire and take control of the match. Swagger tags in and delivers a gut-buster, but Jimmy kicks out at two. Swagger keeps control and tags in Cesaro, who stomps away on Jimmy as we head to another “commercial.”
We’re back and Swagger quickly gets Jimmy to tap out. The Usos are eliminated.
The Prime Time Players enter the match. O’Neil goes to kick Swagger, but Swagger takes his leg out. Swagger locks in the Patriot Lock, but Young saves O’Neil. O’Neil tags Young, but Swagger gets him in the Patriot Lock. Young gets put and plants Swagger and gets the pin fall.
Winners and number one contenders: The Prime Time Players.

The Expert Panel makes their picks for the WWE Championship Match. Santino and Riley pick Randy Orton and Booker T picks Daniel Bryan as the kickoff show comes to a close.

We get the usual opening hype video for the pay-per-view, focusing on the feud between Daniel Bryan and Randy Orton. We go live into the arena where Michael Cole, Jerry Lawler, and John Layfield welcome us to the show.

Triple H’s music hits and he makes his way to the ring. He says every match tonight got his stamp of approval and he is going to show that he is not the evil, villainous guy that everyone thinks he is. He says in the WWE Championship Match, there will be no interference from anybody; no Shield, no Big Show. He asks the fans if they are ready for the show, but Paul Heyman and Curtis Axel come out to interrupt.

Heyman says he has emailed, texted, and left messages for Triple H. He says he has a desperate need to speak with Triple H. Triple H says Heyman looks terrible. Heyman yells at Triple H, but then apologizes. Heyman says Triple H has made one serious error of judgment tonight. He says Triple H put him in a match with CM Punk. Heyman begs Triple H to cancel the match. Triple H says Heyman has already tried to weasel out of the match, but there it is no reason to be scared. Triple H tells Heyman to just let Axel handle Punk. Triple H asks Heyman if he can believe Axel can handle Punk. Axel asks Triple H if he thinks this is funny. Axel brings up the time that he beat Triple H on Raw. Triple H tells Axel to not poke the bear. Triple H says what he is going to do is going to walk to the back and Axel is going to defend the Intercontinental Championship against the first person he sees.

Heyman says the match is being contested under protest by Curtis Axel.

We see Layla, Aksana, and Alicia Fox backstage and AJ Lee walks up. She says they should go out there and show those wannabe Divas who they are. Aksana and Alicia walk away and Layla says she will go straighten them out and AJ says the match is next. WWE Divas Championship Fatal Four-Way Match: AJ Lee (c) vs. Brie Bella vs. Naomi vs. Natalya
AJ tries to escape, but the other three won’t let her run. They beat down AJ on the outside and then Brie takes control of the match in the ring. Naomi comes back and drops Brie with a dropkick. Naomi slams Brie to the mat and goes for the cover, but Brie kicks out at one. Natalya and AJ get involved again and AJ rolls Natalya up for a two count. Naomi drops Natalya with the Rear View, but Brie breaks up the pin attempt. Natalya rolls Brie up, but Brie kicks out at two. Naomi goes for a dropkick on Natalya, but Natalya moves. AJ tosses Naomi to the outside. AJ pulls Naomi off the apron and Brie sends AJ to the floor. Brie rolls Natalya up for a two count. Natalya drops Brie and Naomi with a clothesline and then slams Brie down onto Naomi. Naomi goes for a double-Sharp Shooter on Brie and Naomi and she locks it in. AJ knocks Natalya down from behind. AJ locks Natalya in the Black Widow, and Natalya taps out.
Winner and still WWE Divas Champion: AJ Lee.

We go back to the Superstar Panel with Mathews, Marella, Booker, and Riley. They talk about the World Heavyweight Championship Match, which is next. They all think Van Dam will leave with the title. We see Curtis Axel and Paul Heyman backstage. Axel is excited and Heyman is worried. Heyman says if he is left alone with Punk, he won’t be here to help Axel anymore. Heyman said Axel made an enemy in Triple H tonight. Axel asks Heyman if he believes in him. Heyman says he has since day one and he needs Axel to believe in himself tonight.

We see Triple H on his phone backstage. Randy Orton walks up and wants to know Triple H’s logic. Triple H says everything will be fine. Orton walks away and Triple H smirks.

Fandango (w/Summer Rae) vs. The Miz

We see a video package for the National Guard.

We see the video hype package for the feud between the duo of Curtis Axel and Paul Heyman and CM Punk. We see the video hype for WWE Battleground, which is on October 6th. Rollins and O’Neil start the match. Rollins comes off the ropes, but O’Neil catches him and slams him down to the mat. O’Neil tags in Young. Young comes off the ropes and slams Rollins to the mat. Young goes for the cover, but Rollins kicks out at two. Young takes Rollins down again and then tosses Reigns over the top rope. Young plants Rollins again and tags in O’Neil. O’Neil stomps away on Rollins in the corner and blows on his whistle for every stomp. Young decks Reigns on the outside and Rollins takes Young down inside the ring. Rollins tags in Reigns, who goes to work on Young. Reigns slams Young down to the mat and tags in Rollins. Rollins gets Young in a headlock, but Young tries to fight out. Young counters with a belly-to-belly throw. Young tags in O’Neil, who dominates both members of The Shield. Rollins comes back and goes for a dropkick, but O’Neil slams him to the mat with the Clash of the Titus. O’Neil goes for the cover, but Reigns breaks it up. Reigns spears O’Neil out of nowhere and Rollins gets the pin fall for the win.
Winners and still WWE Tag Team Champions: Seth Rollins and Roman Reigns.

We take a look back at Ryback becoming the newest Paul Heyman guy earlier tonight.

We take a look at the video hype package for the main event tonight: Randy Orton vs. Daniel Bryan.